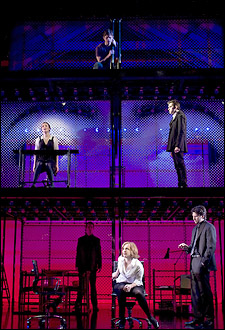 We’re always on the look out for an original musical (as in something not based on a book, play, movie, novel…etc.) and we’d had our eye on Next to Normal. We jumped to go see it though when Brian saw it not once, but twice, during his recent visit here. So, for this year’s anniversary show (yesterday was the 14th anniversary of our first date) we went to see this original — and absolutely amazing — show.

Let’s get the spoilerage our of the way first (if you don’t want to know too much about this show, skip to the next paragraph):  The show focuses on the Goodman family. Nearly eighteen years ago Diana and Dan had a baby boy, who died eight months later due to a medical problems the doctors never figured out.  Gabe has ghost haunts the family as Diana has been bipolar (and worse) ever since. Now, with a 16 year-old-daughter who feels ignored and a husband that doesn’t know what to do, things come to a boiling point for this family that just wants to be normal.

Here’s the Goodman family as they were introduced in a series of commercials. Each 15 second spot gives you the smallest bit of information about the character by using an excerpt from one of their songs.

I’ve been digesting the cast recording over the past few weeks and it didn’t prepare me for the full emotional impact of the show. The creators have to be praised for pulling no punches with Diana’s illness and the affects it has on those around her. Yet, they find a good bit of humor too. “My Psychopharmacologist and I” shows Diana getting her drug treatment adjusted several times and it runs through all the various side effects. “Valium is my favorite color,” she says at one point. It’s one of the funniest songs I’ve ever heard.

One of my favorite songs is “Superboy and the Invisible Girl.” I had a clip of the cast recording the song in my last post on this show, but I found a performance clip that I can share. This song is all about the daughter’s frustration at coming in second to her brother… that’s her boyfriend-to-be Henry, looking confused on the right.

The cast is 100% amazing. I expect it will be Tony nominations on Tuesday for the four people at the heart of the show: Alice Ripley as Diana, J. Robert Spencer as Dan, Aaron Tevit as Gabe and Jennifer Damiano as Natalie. They each deliver visceral, exuberant and heartbreaking performances. In particular, this is Ripley’s star turn as she grapples with Diana’s many emotional states and keeps from going into the melodramatic or hokey. The New York Times had it right when it called this a “feel everything musical.” I don’t know that I’ve cried so much at a musical (not even Rent) because the raw emotion is so powerful.

Looking across the potential nominees for Best Musical this year, it’s sad that there were so few truly original musicals. Of the nine new musicals eligible for the highest honor this season, only Next to Normal, 13 and [title of show] fit that bill (the other six either came from movies: Billy Elliot, White Christmas, Shrek, 9 to 5…a book: Tale of Two Cities… or has a “jukebox” score: Rock of Ages). Original is a hard sell on Broadway. Just look at [tos], which only held on for four months. Next to Normal had a nearly full house this afternoon and stunning reviews when it opened two weeks ago. Hopefully audiences will find this piece of wonder at the Booth Theatre.