Friday Geek Out: Streets of Fire 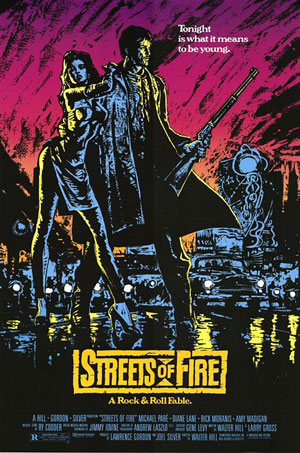 There were some distinctly odd things that came out of the 80s and Streets of Fire was one of them.

The 1984 “Rock & Roll Fable” was directed by Walter Hill and co-written by Hill and Larry Gross, who worked on this film right after their blockbuster success with Eddie Murphy’s 48 Hrs. In the press notes for the movie, Hill said that the film’s origins came out of a desire to make what he thought was a perfect film when he was a teenager and put in all the things that were “great then and which I still have great affection for: custom cars, kissing in the rain, neon, trains in the night, high-speed pursuit, rumbles, rock stars, motorcycles, jokes in tough situations, leather jackets and questions of honor.” All of that shows up in mass quantities in Streets of Fire.

At it’s core, Streets of Fire is a love story. Tom Cody shows up in his hometown because he’s told by his sister that his first love, rock star Ellen Aim, has been kidnapped and needs to be rescued. Tom hooks up with McCoy and gets Ellen’s manager to agree to pay them to rescue her.  Ellen’s held at a rival club and, of course, they manage to get in, rescue her and blow a lot of stuff up. Ellen and Tom reunite (for that kiss in the rain) before he has the final showdown with her kidnapper, who he ultimately destroys with a little help from railroad spike hammers.

It’s a  bonkers movie with a distinct visual style and  a good cast. Michael Pare (who showed up just a couple weeks ago in Geek Out for Eddie and the Cruisers) is the movie’s hero. Diane Lane is rocker Ellen Aim. Amy Madigan becomes Cody’s right hand man as the tough as nails McCoy. Rick Moranis shows up as Ellen’s sleazy manager (and current boyfriend). Willem Dafoe plays his usual bad guy as the kidnapper. Bill Paxton even shows up as a bartender. In some bit parts you also see Lynn Thigpen (Where in the World is Carmen Sandiego? among many other things) and Ed Begley Jr. (St. Elsewhere).

The movie was presented as a summer blockbuster and opened on June 1, 1984 (the same weekend Star Trek III: The Search for Spock opened). Streets of Fire made much less than its $14 million budget.

The music really added to this film. Initially the filmmakers wanted to use Bruce Springsteen’s Streets of Fire to close the film. However, it’s said that once Springsteen heard it was to be Ellen Aim singing the song,  he pulled the rights to it. So, they had Jim Steinman (a Geek Out favorite who is responsible for some great Meatloaf songs as well as the score for Dance of the Vampires) write two original songs, one to open and one to close the film.

The hit song off the soundtrack wasn’t one of Steinman’s though. Dan Hartman’s version of “I Can Dream About You” was a top 10 hit in the summer of 1984. Here’s how that song looks in the movie.

Of course, I have to include the Steinman songs too.  You heard “Nowhere Fast” in the trailer. “Tonight is What it Means to Be Young” closes the film (This song actually cropped again, years later, with slightly different lyrics as the finale of Dance of the Vampires).

As I researched this write up, I discovered that a pseudo-sequel was made last year. Road to Hell recasts Pare as Tom Cody. Here Cody is a worn out solider looking for his one true love, Ellen Aim, and for his chance at redemption. Deborah Van Valkenburgh is the only other original cast member to return for Road to Hell, once again playing Cody’s sister. None of the original creators were involved, though apparently the production did license two Steinman songs for the film (I can’t seem to find out which ones). It looks like this film will crop up on DVD later this year.