Every Little Step: The Journey of A Chorus Line 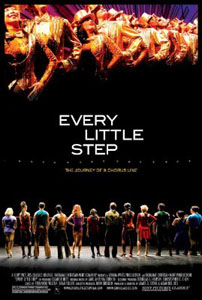 Regular readers know that I have a special place in my heart for A Chorus Line (I detailed most of that in a June 2007 post about seeing the Broadway revival).

Now, a movie about A Chorus Line is out in limited release (opening in New York and Los Angeles last week). Every Little Step uses the auditions for the 2006 revival to show not only what it’s like to audition for a show about auditioning, but also looks at the show’s 1974 creation.

For the auditions, the film crew was allowed unprecedented access to the actors and creative crew. The roles of Cassie, Val, Shelia, Connie, Christine, Mike and Paul get the most attention. The process takes months, with a four month break between initial open calls to first round call backs and another four months until the final call back. I’d always had the impression that casting happened pretty quickly, but this was rigorous and emotionally draining. It was incredible watching how different actors put their spin on roles that are so iconic and well defined. In particular, the competition between the Cassies and the Shelias was fascinating.

One person who seemed to have no competition was Jason Tam reading for Paul. His audition might as well have  been an opening night performance as he reduced director Bob Avian (who’d worked on the original production) to tears.

The historical footage in Every Little Step is riveting, insightful and a rare look at the creation of a masterpiece. A Chorus Line began in Michael Bennett’s apartment on January 18, 1974, when he gathered friends of his from the dance community. They spoke for hours about their lives and he recorded it all. Those tapes became the show. In addition to hearing excerpts of the tapes, there is archival footage from the original 1975 production (including Donna McKechnie performing “The Music and The Mirror”) and a conversation with Michael Bennett and Bob Avian discussing how the production came together. Even though I’ve read the book On the Line, written by three of the original cast members, this archival footage added a lot to my understanding and appreciation of the show.

As you can tell, it was a great afternoon at the movies. I’m hoping the eventual DVD has even more footage from both the 1975 and 2006 productions. If you’ve ever seen A Chorus Line, or you just like theater, this is a must-see movie.