Week two of the new riding regime was even better than week one. My riding got stronger, with my traveling time cut down by about five minutes (I expect that to dip more, hopefully by at least five more minutes). I also picked up a bungee cord so I’m able to strap some of the crap I carry onto the bike rather than wearing it on my back.

Here’s a look at the week on the bike.

Monday: Raining in the morning… didn’t ride… annoyed that I had to ride the  subway. Yes, it’s true, I found the subway annoying. I’ve already grown to love being outside for the duration of the commute. Even though the subway meant I got to read for a while, I didn’t like it.

Tuesday: After a ride-free Monday, I rode today even with the chance of rain. I did get misted riding in. On the way home, I had to deal with more stupid pedestrians on 9th Avenue. Two separate instances: 1) cab driver parks along the right side of the bike line (which is a legal place to  park), gets out of his car, looks directly at me coming and then decides to cross anyway. I yelled at him: “If I crossed into your lane like that, you’d run me over.” He apologized. 2) A couple blocks later, three people walking side-by-side down the middle of the  bike lane. I had to brake to slow down, the brake squealed causing one of them to jump (I’m glad I could scare them). As they made space for me, I informed them that this was not the sidewalk. Seriously, is there something on 9th Avenue that makes pedestrians stupider than usual?

Wednesday: Another gray, rainy day. I made it uptown with no rain. Coming home was weird. There was some sun in midtown, but going on to the bike path at Chelsea Piers I crossed into the fog. It was like crossing some great barrier. Then I rode into some light rain. I can’t say I got home soaked, just very moist.

Thursday: The sun came back! Yay! Beautiful rides to and from work. A distinct advantage to riding a bike: if the traffic sucks, I can leave the street and become a pedestrian walking the bike. That happened on the way home. Traffic was all messed up on 37th Street and there wasn’t room for me to get through, so I walked my bike for a half-block and got around the problem. I’m sure most of the cars I passed had to wait at least 10-15 more minutes before the fender bender was cleared. Weird wind tonight too. It would push from the back and then whip around and hit from another side. It made for some moments of challenging riding.

Friday: Another beautiful day. The morning was crisp and clear with not much wind. I rerouted my way to work too, cutting inland at 20th Street instead of 18th and taking a couple turns out of the route. The ride in today was the fastest yet, somewhere around 37 minutes. Not only did I cut out some turns, but I simply was faster, covering more blocks before being stopped by signals. Coming home was warm and gorgeous. An extra benefit to riding in the warm, sunny weather: hot, shirtless guys running along the Hudson River path. 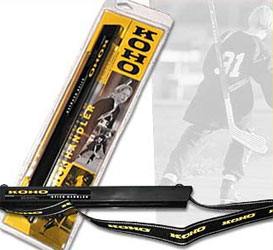 Saturday: Another sunrise ride to Sky Rink play at Ronnie’s Ice. I got additional equipment this week. The Koho Stick Handler I ordered arrived. It’s a simple piece of plastic that you can lock one or two sticks into and then wear it across your back. So now I strap my pack of clothes to the rack and strap the sticks across my back. This thing is perfect… and only cost $3! I’ll ride up again tonight because I’ve got a Wizards/Ordinals scrimmage at 10.

Overall, it was an even better bike week this week than last because I’m more comfortable in general. Looking into next week, I know I can’t ride on Wednesday because I have to dart to Brooklyn after work (and this is a good day to skip since the forecast predicts rain). There’s also a chance of rain Friday. But, as this week shows, just because there’s a chance of rain, I don’t necessarily have to give up the ride. As long as I can do the morning ride dry, the rain can come get me for the afternoon!