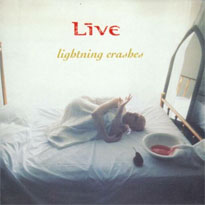 Live’s 1994 album Throwing Copper yielded quite a few excellent songs, but none of them were as amazing as “Lightning Crashes.” The song was written to honor Barbara Lewis, a 19-year-old friend of the band, who was killed by a drunk driver. She had many of her organs donated and the lyrics detail how someone’s death can bring life to others.

This song started cropping up on radio and on MTV in late 1994 and played into early 1995.  Interestingly, it was never officially released as a single so it didn’t climb Billboard’s Hot 100 chart, although it did reach #12 on the Hot 100 Airplay chart, #6 on the Mainstream Top 40 chart, and #1 on both Modern Rock Tracks and Mainstream Modern Rock Tracks charts. As a result, it is considered to be the biggest hit of Live’s career.

For me the song is one of the perfect blends of music and voice. Lead singer Ed Kowalczyk builds to an amazing wail as the song plays out. That sends the emotional impact through the roof by the time the song wraps up. This is one song that stayed with me from the first time I heard it and it remains in heavy iPod rotation.

If you’ve never heard it, here’s your chance… and if you have, now’s a good time to revisit it and enjoy it all over again.