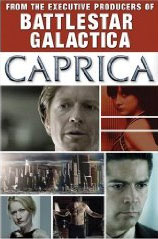 Caprica, the new prequel to Battlestar Galatica that is set to be a Sci-Fi Channel (or by then it’ll be SyFy Channel) series next year, arrived on DVD this week. Netflix was kind enough to have it in my mailbox on day one.

Set 58 years before the fall of the colonies, which we see in the Galactica 2003 miniseries/series pilot, Caprica isn’t set in space at all. It’s very much planet-bound and focuses on two families, the Adamas and Greystones. Joseph Adama, a somewhat corrupt attorney, and Daniel Greystone, a wealthy scientist, are brought together because their daughters (as well as Adama’s wife) are killed in a terrorist attack. Daniel’s daughter, who is estranged from him before her death, is also quite the scientist as she figured out how to download enough information to make an excellent copy of herself. Her father discovers this and decides to take the avatar and put it into a robot body. Care to guess what those robots are?

We see a  bit less of Adama in the pilot. We know he’s a corrupt lawyer who is trying to make a break from the people pulling his strings. Greystone asks him to help secure a part he needs for his robots because Greystone knows Adama has the connections for it. Young William Adama is also introduced, although he doesn’t have a large part in the pilot, he is, of course, a major connection to the BSG to come.

Connecting Caprica’s timeline into BSG‘s was difficult for me. I haven’t seen the original BSG miniseries since it first aired and a lot of the historical details from those episodes make up the framework Caprica uses. Luckily I found the Battlestar Wiki and that set me straight on the timeline and what is known about Caprica before the fall.

I found Caprica to be interesting and pretty enjoyable. At times, however, it’s a bit heavy handed as it draws parallels between Caprica and our Earth. Caprica delivers the same message the final moments of the BSG finale did as it tried to warn us about what’s going on in present day Earth. “Everything has happened before and will happen again.” That plays itself out on Caprica, as we already know… and the producers are trying to say it can happen for us too. In my opinion, they need to be more subtle about that.

It’s going to be interesting to see how Caprica moves into series. There’s a lot of material to use. In just this pilot we see the religious strife between those that believe in the gods and those that believe in one god; the racial/ethnic issues between the different planets of the colonies; the initial creation of the colonies Cylons, a good bit of hedonism (which is made very clear in the opening scenes of the show) and plenty family drama. If the series goes on long enough, we could get to see the beginnings of the Cylon revolt since that happens just six years from where Caprica opens.