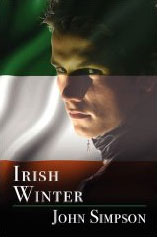 Irish Winter by John Simpson was outside the realm of what I normally read. Set in Cork, Ireland in 1919, Irish Winter focuses on two young men who fight for the IRA against the British who invaded their country. Ian Mulroney and Devlin Walsh are mere acquaintances until Ian witnesses the murder of an IRA member and his mother in the town’s center. Ian’s outrage forces him into action and he joins the IRA. It becomes Devlin’s job to get him trained.

As Ian and Devlin work together and go on missions, they end up falling in love.

The love story between the men is very enjoyable. Simpson draws solid characters that are easy to like. You witness their trepidation about revealing their feelings for each other and then get to watch them fall deeper in love while all around them is chaos.

Unfortunately, some of Simpson’s writing can pull you away from the book’s emotional core. Too often he ends up giving way to much exposition. Sadly some of the action scenes feel like you’re reading a recap in a newspaper rather than being there as it happens. There are also instances of stilted dialogue. Worst of all is a death that comes out of nowhere at the end of the book. It feels like it was done in an effort to hurry up the ending rather than dealing with what could’ve been a major conflict about the boy’s relationship.

On the whole, I’m glad I read the book because the characters were enjoyable as was the side trip to Ireland. I just wish some of the writing mechanics were stronger.

Up next: How It Ended: New and Collected Stories by Jay McInerney.