Friday Geek Out: Eddie and the Cruisers 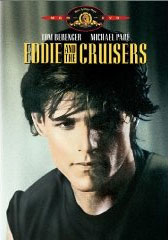 Eddie and the Cruisers is a film and soundtrack album which turn 27 this year. I discovered the movie while working at Star Video while I was in college in Tuscaloosa, Alabama. There always had to be something playing in the store and this was a go-to movie for me and a couple of my co-workers. We played it at least once a week because it had decent plot and good music.

The movie centers on a 60s rock band, Eddie and the Cruisers, who go from playing bars in Jersey to the big time when they add a new lyricist and keyboard player to the group. They have a hit album and tour and everything looks great for the group. But when they get ready to release their second album, the record company rejects it as being too dark and strange. The night the company rejects the record, Eddie dies in a car crash and the next day the masters for that album are stolen.

The band’s story is told in flashback as a modern day reporter is trying to piece together the mystery of Eddie’s death on the 20th anniversary. The reporter visits each of the surviving band members who have all gone on to different careers.

The film’s cast is pretty much all B list: Tom Berenger is the lyricist/keyboard player Eddie hires. Michael Pere made his motion picture debut playing Eddie. Joe Pantoliano, way before The Sopranos is the band’s manager. Ellen Barkin is the reporter digging for the truth on the missing album. John Cafferty and the Beaver Brown Band provided the music for the movie and Cafferty is the singing voice of Eddie.

The movie failed to catch fire at the box office, although the success of the soundtrack did give the movie a life on cable and on video. It became sort of a minor cult classic. While the plot is certainly nothing dazzling, the acting sold the story and Cafferty’s songs were very good.

Here’s some samples of Eddie and the Cruisers, starting with the trailer:

The most successful single from the soundtrack was this one, “On the Darkside.”

And one of the other singles was “Tender Years.”

Even though the first film didn’t make a lot of cash, a sequel rolled out in 1989 called Eddie and the Cruisers II: Eddie Lives. This film was a dismal failure and is not worth watching.