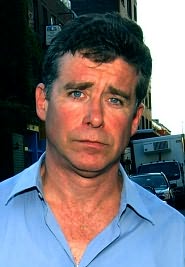 It’s appropriate that Jay McInerney made a stop at the Barnes & Nobel in Tribeca to read from his new book, How It Ended: New and Collected Stories. Many of his stories and novels, including his breakthrough Bright Lights, Big City, are set in and around this part of lower Manhattan.

I was excited when Will mentioned yesterday that he’d seen the signs up for tonight’s reading. I’ve been a McInerney fan since I read Bright Lights as part of my freshmen English lit class. Bright Lights was also the subject of a Geek Out nearly two years ago. It’s worth noting that Bright Lights celebrates its 25th Anniversary this year and it’s cool that the first short story in How it Ended is “It’s Six A.M. Do You Know Where You Are?”, the short story that led to Bright Lights.

This book is made up of 26 stories, only seven of which have appeared in book-form previously. Like “It’s Six A.M…,” some of these stories are ones that led to McInerney’s novels. About one-third of the stories are new, written in the past year and a half. The rest are from various magazines. McInerney read “Everything is Lost,” one of the newer stories, which centered on a woman throwing a surprise party for her boyfriend…and discovering along the way that he really may not be the one for her.

During his Q&A we found that McInerney doesn’t like the Bright Lights movie, even though he wrote the screenplay for it. I was glad to hear that because, honestly, I don’t like it either. He mentioned it’s getting remade by director Josh Schwartz (The O.C. and Gossip Girl). As McInerney said, it can’t be worse than the original. According to IMDB, it looks like the remake is due in 2010. While I was getting my books autographed, I asked what he thought of the musical version. He said he liked the songs and wasn’t so crazy with the Scottish narrator, which I agreed with.

I got a signed copy of the new book. I also replaced my copy of Bright Lights, Big City. I tore the apartment apart last night looking for mine from college and ended up with a vague recollection of loaning it out to someone a few years ago (no idea any more who that was). Happily the book looks just like the one I had in 1986.