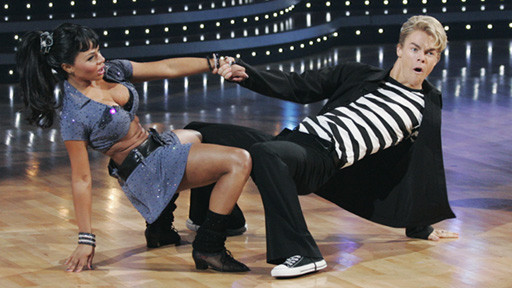 Time flies when you’re having fun! This week marks the half way point in the Dancing with the Stars season and the dead weight will be completely gone soon (we’ve got to get rid of Steve-O and Lawrence to get down to the serious contenders). This week’s jives and rumbas were great with no horrific mis-steps and overall enjoyable dances.

Ty & Chelsie: (Jive) Who knew Ty could hula-hoop?!? It was a fun, energetic dance and he was certainly looser than last week. He seemed to pull off some complex footwork too with some minor flubs. I enjoyed it, but the judges slotted it in the middle of the pack.

Shawn & Mark: (Rumba) Another lovely dance from these twos. Shawn captured the character wonderfully, really capitalizing I thought on the prom theme that Mark set during rehearsal. She also moved her body into some wonderful shapes… her gymnastic ability rising to the surface again. This was the rumba of the night.

Lawrence & Edyta: (Jive) It was nice to see Lawrence more energetic, but it still could’ve used more. There were still too many tricks from Edyta, such as the lift and spin at the end, to make the dance look more interesting than it is. He needs to work to be still more like Warren.

Melissa & Tony: (Rumba) Hot, steamy and romantic! The moves that she did while she held Tony’s neck behind her were gorgeous. I agree with Len though, she needs to look less ballet-like.

Lil’ Kim & Derek: (Jive) Here’s the jive of the night. I don’t know what Len’s issue was with the more theatrical presentation (and to give it an 8…boo).  I loved every kick and jump in this, especially that they both did death spiral-like moves. This deserved triple 10s rather than just two.

Steve-O & Lacey:(Rumba) Woe is Steve. He executed the choreography respectably tonight (yeah, I know the judges didn’t feel that way). I wish he’d gotten the character better because I think that would’ve made a good package. The poor guy didn’t really have an expression at all during the dance. * sigh * I so want to see better from him. I feel it’s in there somewhere if Lacey could just completely tap in to it.

Gilles & Cheryl: (Jive)I tend to agree that this week the dance moved too fast. They had a lot of good stuff going on in there, but it went by in a blur. Really, though, Gilles can do no wrong and this was another stunning dance.

Chuck & Julianne: (Rumba) So romantic. For character, romance and steam, these two took the night as you’d hope they would since they are a real couple. I agreed with Len as he talked about how Chuck shows perfect moves and then doesn’t. He is very back and forth and I felt his arms were a little out of whack tonight in their extensions. It was still a beautiful dance though.

Bottom two: I’m going to say Ty and Lawrence. I think Steve-O’s fans will come through again and save him from the red light of doom. In terms of going home, something in my gut tells me we’re going to be shocked this week and it will be Ty (though I’d much prefer Lawrence).

Results Show Update: And there goes Steve-O. I wish it could’ve been Lawrence, but at least it wasn’t Ty.

I loved Tony and Julianne’s dance to the Rascal Flats song. It was graceful and just amazing watching Tony toss her around. Macy’s Stars of Dance didn’t move me much. I just don’t find Carmen Electra to be a star of dance. It was great that West Side Story got some airtime…but can’t they present something on TV besides “America”? Its been done now on Good Morning America (they did do one other number on GMA) and Late Night with David Letterman.

Next week there’s the group dance and that is always a fun mess!