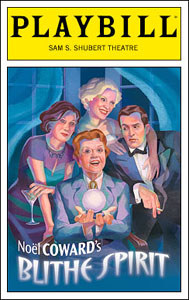 We knew the show would be great with these names above the title: Angela Landsbury, Rupert Everett, Christine Ebersole and Jayne Atkinson. We were not disappointed. This revival of Noel Coward’s Blithe Spirit lived up to every expectation we had.

This “improbable farce” has only been on Broadway twice before: its 1941-43 debut and a short-lived 1987 revival starring Richard Chamberlin, Blythe Danner, Judith Ivey and Geraldine Page.

We were excited about this new production as soon as we heard the cast, especially with the opportunity to see Angela Landsbury on stage. We’d missed her 2006 appearance in the two-woman show Deuce and we weren’t going to let that happen again. She is delightful as Madame Arcati, a medium who is invited to the house so that Charles (Everett) can research the mystery novel he’s writing. Of course, Charles, his wife (Atkinson) and their other guests assume she’s a fake who puts on a good show. Charles soon realizes that’s not the case as he starts to see and hear his dead wife Elvira (Ebersole).

From there, it’s excellent Coward farce with slamming doors, breaking vases, and a lot of misdirection. The cast, guided by the excellent Michael Blakemore (a Tony winner for  both Copenhagen and the recent Kiss Me, Kate revival), keeps the laughs coming as Charles gets in deeper trouble with both his living and dead wives as he tries to sort out what has happened. 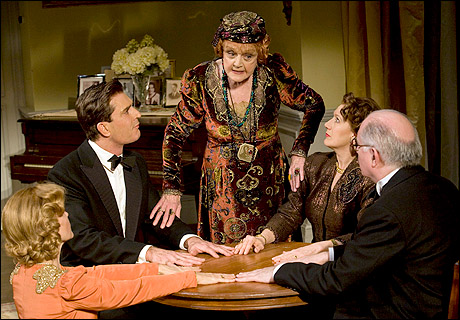 Landsbury steals her scenes as the bumbling Arcati, particularly with the dance she does to call her control for the seances. Everett, making his Broadway debut, is very good as he gets ever so close to madness (and who wouldn’t go mad with all the ghosts about) before pulling it together in the end. Atkinson was also a treat. She’s been on Broadway a number of times and we’ve never seen her. It was fun seeing her in a farce instead of a straight up dramatic role. It was also nice to see Ebersole in a non-musical role. She seems to have a lot of fun with her mischievous ghost. (Ebersole is heard singing between scenes, however, and the interlude music is being recorded for Christine Ebersole Sings Noel Coward, which will be released this spring.)

Also of note is Susan Louise O’Connor, making her Broadway debut, as Edith the maid. She’s not on stage much, but she certainly makes good use of her time there. The maid is timid and quirky and tremendous fun to watch as she takes care of her business.

It was a tremendous evening on Broadway seeing a classic work with a theatre legend, and the rest of her castmates, delivering subperb performances.