I finally got some hockey in during a Chicago trip!

The Blackhawks are always on road trips when I’m in town. As I lamented this fact with Kyle who works in the Promotions.com Chicago office he mentioned the Chicago Wolves and it turned out they were at home for this trip. So Kyle and I went off to see the Wolves take on the Lake Erie Monsters tonight.

These teams are members of the AHL (American Hockey League). The Wolves are affiliated with the Atlanta Thrashers and the Monsters are connected to the Colorado Avalanche. I haven’t seen minor league hockey since I had half-season tickets to the  Birmingham Bulls of the ECHL (East Coast Hockey League) in their inaugural season back in 1992. The Bulls were affiliated with the New Jersey Devils and played some great hockey. 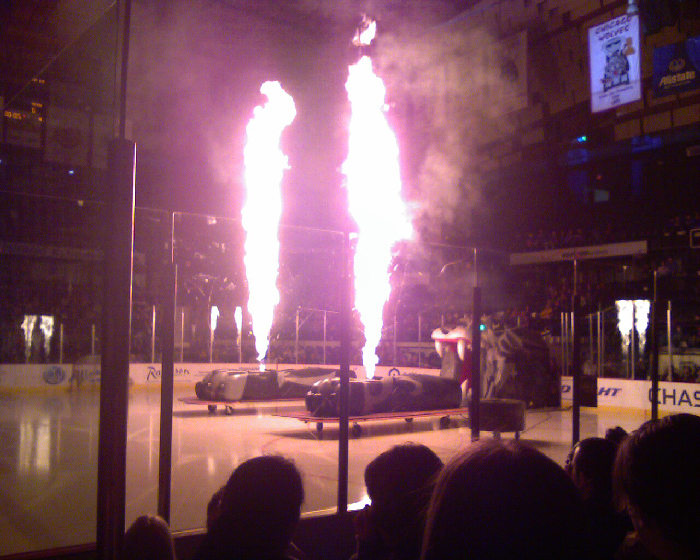 The game tonight was fantastic. The Wolves destroyed the Monsters 5-0. It was great to see such eager hockey. Sometimes the NHL games don’t always seem to play with hustle and fire. The Monsters went down swinging (literally) and the Wolves never eased up on their lead. In the second and third periods there were lots of fights too, players got 5 minute penalties, players got ejected and got game misconducts. It was great!

The pre-game was pretty awesome (and kinda overkill for a minor league team). As the photo above shows there’s a large wolf head with flaming paws that the players come through. The gallery below also shows some other pre-game sites as well as Skates, the Wolves mascot.

I snagged a Chipolte Burrito stress ball (actually I guess it’s a stress burrito). They threw these into the crowd pre-game and each one had a player’s name on it. If that player scored the first goal of the night, you got prizes. Unfortunately my player, #10 – Stevenson, scored the third. They also threw shirts in to the crowd between periods, but I didn’t get any of those either (so I decided to buy one because they were pretty cool).

All-in-all a great hockey night in Chicago. Thanks, Kyle!

Check out more pictures by clicking on the tumbnails