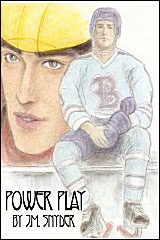 The book opens with star college hockey player Ryan Talonovich getting severely injured during a practice. He’s in a wheelchair and out of commission. He’s not paralyzed, but he needs a lot of physical therapy to just walk again. Nineteen, stuck in a wheelchair and living at home again, Ryan is not a happy guy. His team tries to draw him back into the fold by getting him to work on the team’s website. He doesn’t exactly want to, but it does get him back to the rink. After watching the team practice, he checks out the local skate club take to the ice.

More specifically he catches sight of Dante Espinosa; Dante sees Ryan too. They both take notice.

From there it’s all about the romance—the stolen looks, wondering if the other one feels the same, getting confirmation, the first tentative kisses, being the first to say “I love you,” finding out about each other’s pasts, intimate exploration, meeting the parents, and talking about their future.

Of course, there’s other things happening too, but the romance is always there. Dante is a short track speed skater with dreams of the Olympics. His first stop is to qualify for—and win—the State championships. Dante’s biggest competition is a rich brat who tries to use news about Dante’s new boyfriend against him, despite Ryan and Dante’s best efforts to keep their relationship out of the skate club.

Snyder builds the story beautifully, alternating chapters between Dante’s and Ryan’s viewpoints. It’s a great method for this story so that we are constantly aware of what these characters are thinking as their relationship grows. I also liked that neither boy had demons about being gay. They were both completely okay with it. Dante’s also out to his mom while Ryan’s mom knew more that he thought she did. Yes, Dante was trying to keep it quiet in the skate club, but I think that’s to be expected since not everyone in this day and age is as enlightened and tolerant as they should be.

I only had two problems with this book. First, I couldn’t read it fast enough. I was so caught up in the characters I had to make sure to make sure I wasn’t just skimming the pages because I couldn’t way to see what happened next. It’s not a problem with Snyder’s pacing, which was fine, I was just an over eager reader. Second, it ended too soon. The book opened with Ryan’s accident and it didn’t end with us knowing if he got out of the chair and back to the team. I have little doubt that he did given the progress he was making, but I would’ve liked to have seen it happen. At the end of it all, I wasn’t ready to let go of the characters just yet.

Next up: Irish Winter by John Simpson. I picked this up a couple weeks at a book fair Will and I went to and we got to meet the author. After chatting with him, I’m eager to dig into this.