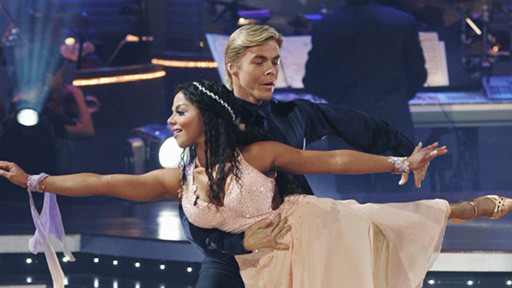 This was going to be a blissful week or a tragic week as my two favorite dances shared tonight’s Dancing with the Stars. I love the Viennese Waltz for its fluid romance and the Paso Doble for its strong passion. Tonight the waltzes led the way with the majority of them being lovely. A good paso was difficult to come by, although the one that was stole the show!

Chuck & Julianne: (Viennese Waltz) Chuck has come a long way. This was by far his best dance. He executed the mid-dance twirls so well. He did lose his way just a little bit coming out of that, but it was a minor blip in a lovely dance. I liked getting to start the show being completely moved by a beautiful dance.

Lawrence & Edyta: (Paso Doble) Boring! Once again he just lumbered through. I was stunned the judges felt he did better this week. Edyta couldn’t save it this week either because her choreography also wasn’t the best. It was the worst paso of the night.

Shawn & Mark: (Viennese Waltz) Simply gorgeous! Shawn does so well in ballroom when she gets to let the precision of gymnastics go. Her musicality was great and Mark gave them some classic choreography. I was moved.

Melissa & Tony: (Paso Doble) Something was off here. She admitted during the judging that she was a little off during the performance. I did like the choreography, but I didn’t feel it meshed well with the music and I found that distracting more that Melissa loosing her way occasionally. What she does need to watch though is telegraphing that she lost her place by her expression. Bruno’s 9 seem too high here.

David & Kym: (Viennese Waltz) Kym did beautiful work here. I loved the fans in the opening. Unfortunately, David proves time and again that he’s just not all with it. He was particularly painful tonight when he was dancing out of hold.  I wish I could’ve seen Kym do her choreography with a better dancer.

Gilles & Cheryl: (Paso Doble) Wow! The paso of the night, if not the paso of the entire eight seasons. I’m speechless about how incredible this was. I don’t know what Len was going on about saying that it was too busy and then giving it a 9. Everything was spot on. I was moved yet again.

Steve-O & Lacey:(Viennese Waltz) It was great to see Steve-O execute a dance well. Yes, it was still clunky and a bit stiff, but he did pretty well here. Unfortunately, he should be doing even better in week five. I did think it had a nice innocent quality.

Ty & Chelsie: (Paso Doble) Oh, Ty. Intensity doesn’t mean robotic. Just a few seconds in I yelled at the TV hoping he’d loosen up just a bit and it didn’t happen. He performed the technique great, if only it wasn’t Mr. Roboto. Can he get a do-over?

Lil’ Kim & Derek: (Viennese Waltz) What a beautiful expression Lil’ Kim had during the dance. It was the perfect accompaniment to a beautiful dance. As usual, Derek created a number that showcased her abilities perfectly. It was so fluid, romantic and just a hint sexy too. I’m glad I got to end show with another moving dance.

Bottom two: Steve-O and Lawrence.  I figure it’s Steve-O’s week to go, but I’d love to see Lawrence go. I’m tired of his lumbering dances and of his not-so-great personality.

Results show update: I pegged Lawrence right, but missed the boat on Steve-O (and I’m kinda happy about that). I won’t miss David. He was on my hit list like Steve-O and Lawrence, his time just came sooner. I have to say that I don’t like the dance off. It’s bad enough watching painful dances once… do we need to see them a second time?

I missed about half the show tonight because I was getting dinner, but I did catch the Macy’s Stars of Dance performance was awesome. I missed Etta James (I wished I would’ve missed Demi Lovato  instead), so I’ll have to catch her on the DVR when I get home on Thursday.