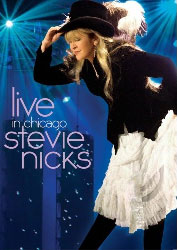 I’ve been a major Stevie Nicks fan for decades. My first exposure to her was in the late 70s. One of my best friend’s had the Fleetwood Mac Rumours album in her house. I was mesmerized by the vocals on “Gold Dust Woman.”I quickly made some cassettes of Fleetwood Mac, particularly the songs Stevie sang on: “Rhiannon,” “Dreams” and “Sara” to name some of the highlights.

I also discovered her pre-Fleetwood Mac work with the Buckingham Nicks album that paired her with Lindsay Buckingham. This album, to me, sets the tone for what Fleetwood Mac would become once the duo joined.

In 1981, Stevie broke out on her own and released her first solo album, Bella Donna. This album got a lot of play and songs like “Leather & Lace,” “Stop Draggin’ My Heart Around” and “Edge of Seventeen” are still in heavy rotation on my iPod today.

She quickly followed up Bella Donna with the The Wild Heart in 1983 and I continued to love the music: “Stand Back,” “If Anyone Falls,” “Beauty & The Beast,” “Has Anyone Every Written Anything For You?” I saw Stevie live on the Wild Heart tour when she played the University of Alabama’s homecoming in October that year. Back then, you actually had to stand in a line for concert tickets and, since these tickets went on sale during a school day, I managed to talk my mom into being at the right place for them. She got front row tickets for me, my friends and herself. It was a great show and a lot of fun to watch her do her shawled twirling just a few feet away.

Here’s a bit of what she looked and sounded like in ’83. This clip is “Stand Back” from the ’83 US Festival.

Among my favorite Fleetwood Mac creations from Stevie is “Gypsy.” Here’s a great live recording from 1982’s “Mirage” tour.

This week, Stevie released a live album and DVD, The Soundstage Sessions, which were recorded in Chicago in 2007. Here’s a bit from the DVD, with the first Stevie song that ever stuck with me, the aforementioned “Gold Dust Woman.” It’s great to have a live performance on CD. She’s released DVDs before, but this is the first live disc and it’s incredible.

Stevie’s last studio album was back in 2001 (I was supposed to see her on the Trouble in Shangri-La tour, which had her in Radio City Music Hall on September 14, 2001… but with the events of that week that show was canceled). Hopefully she’ll create some brand new music soon. In the meantime, I’ll certainly be happy with the new live collection.