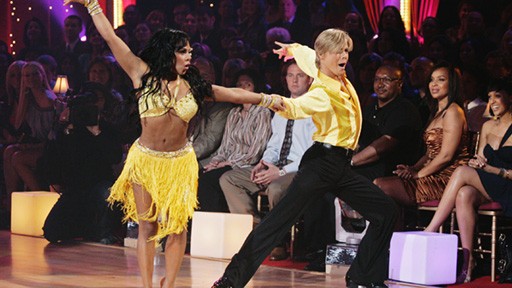 Week three of Dancing with the Stars brought out Sambas and Foxtrots and my goodness did the Sambas get trashed by half the people that did them. Here’s the rundown of tonight’s dances.

Denise & Maks: (Samba) Well, Maks looked great in his Carmen Miranda get up in the rehearsal footage, and that was the only good thing going on for this couple. I’m not convinced Denise actually knew the choreography. She look lost from the beginning. What a mess!

Chuck & Julianne: (Foxtrot) Chuck continues to improve. Last week’s Salsa was good, despite what the judges had to say. Tonight’s Foxtrot moved him to a new level of accomplishment. It was delightfully smooth and fluid plus he looked like he really enjoyed it. Great performance.

Holly & Dimitri: (Samba) Samba disaster number two! Holly said that she was sure Dimitri must want Jewel back… well, regardless of what Dimitri thinks, I’d like him to have Jewel back. Holly is a mess. I’m not convinced she’s really trying, and if she’s trying she’s sure not getting it. To paraphrase Carrie Anne: It was kinda hard to watch.

Steve-O & Lacey:(Foxtrot) Yikes. He’s trying so hard and you can see he wants to make it right. The first few seconds of the Foxtrot looked good and I was hopeful, but he soon lost where he was and looked like he was in pain. I really want to see him pull off one dance before he’s sent home.

Lawrence & Edyta: (Samba) Finally, a salsa worth looking at. Lawrence gets better each week. This was his best dance yet as he really got into the rhythm and fun of the Samba. He’s got a new found confidence in his dancing that should help him to last a few more weeks.

Shawn & Mark: (Foxtrot): Another breakthrough this week. She listened to the judges and followed Mark’s guidance to find fluidity in her precision. This was a graceful, beautiful Foxtrot. It shows that she’s really top four bound. She was the first of the triple 9s for the evening.

Gilles & Cheryl: (Samba) And here is the Samba of the evening. Gilles and Cheryl shook everything they had and, really, who wouldn’t want to be at that party. An incredible week three performance, especially given some of the complex choreography Cheryl threw out there. Another set of 9s.

David & Kym: (Foxtrot) I completely disagree with the judges here. I thought it was lackluster and no where near as fluid as it should be. For Bruno to compare it to Ben Vereen doing a Bob Fosse number is offensive. Ben should get an apology and Bruno needs his eyes checked. Three 8s was way too high of a score.

Steve & Karina: (Samba) The samba pain continues with the best of the worst. I thought Steve sold his mess far better than Denise or Holly, but a mess is a mess even if it is the best one. Good personality or not, Steve really needs to go home. He’s at the bottom of the judges board right now, so maybe that can happen this week.

Melissa & Tony: (Foxtrot) Fantastic. Tony created some great choreography with some complex footwork and Melissa rose to the occasion. Classy and graceful and deserving if the third triple 9s.

Lil’ Kim & Derek: (Samba) I think the few missteps in the middle caused Lil’ Kim to lose out getting her own set of 9s for the night. But she and Derek worked that Samba and it was hot and sexy and was fun, fun, fun. Derek’s going to have to step up the choreography a bit though if they’re going to pull even (or ahead) with Shawn and Gilles.

Ty & Chelsie: (Foxtrot) Ty continues to improve, just like Chuck. He stayed calm with Chelsie tripped and managed to keep a Hollywood movie musical elegance. Yes,  he misstepped in the middle, but given where he started he’s making great improvements and Chelsie is doing great with him. I look forward to see what’s next. I thought the judges cheated them. This was far and away better than David’s Foxtrot and I can’t believe Bruno gave it a 7 instead of an 8.

Results Show Update: Well… that didn’t work out like it was supposed to. First off, I’m stunned that someone who has a judges score of 10 can stay on the show. Carrie Anne was right, Steve’s charm is wearing off and he needs to get off the show. Luckily, we still lost a poor dancer, although I’m surprised that Denise went home over Holly. Next week in double elimination, so perhaps we can ditch Steve and Holly at the same time.

Next week should be fun with new dances too: the Lindy Hop and the Argentine Tango