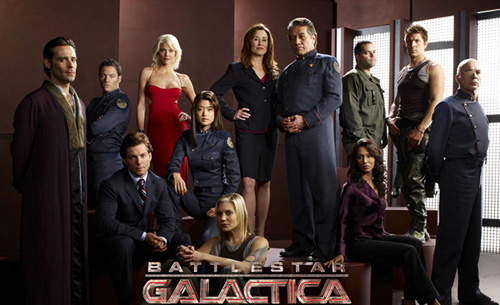 As a sci-fi loving child of the 70s, the 1978-79 Battlestar Galactica was on my TV diet. Coming shortly after Star Wars was in the theaters, this show fed my appetite for space shoot-em-ups. At age 10, I didn’t quite realize at the time how campy this show was, I merely enjoyed it and was sad that it only lasted a year (despite the fact it won a People’s Choice Award for Best New Drama series). The show resurrected for a short time in 1980 with the complete misfire that was Galactica 1980 in which the Galactica and Cylons find Earth. This series only lasted a half season.

As a blast from the past, and to give a feel for the 1978 series, here’s the original opening title sequence.

The 1978 series continues to be a favorite of mine. Yes, it’s campy, quirky and goofy (I mean just look at that robotic dog from the credits). But it is fun sci-fi and even now the special effects hold up reasonably well. Anytime I come across this on Sci-Fi Channel I’ll pause to watch. 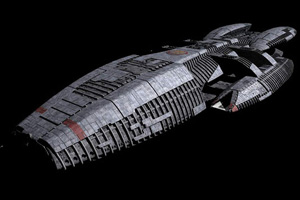 Because I liked the ’78 series so much, I was skeptical when Sci-Fi announced in 2003 that it was going to re-imagine the series. Willing to give it a go, I tuned in for the miniseries in December 2003 and never looked back. This new, serious, dark Battlestar Galatica was superb. Now the Cylons could look like humans and the robotic centurions looked seriously badass instead of actors-in-metal-suits. In a nice nod to the original series there was also “museum” footage with props from the original show and a ceremony involving old-school Vipers doing a flyby while the original series’ theme music played.

I’m glad I took the chance on the miniseries because over the past four seasons, BSG has proven to be one of the best dramas on TV. Note that I said drama, not just sci-fi show. The writing on this show can stand up against any other drama on TV—cable or broadcast network. The show has done everything from (and if you’ve not seen the whole series to this point you might want to stop reading here and jump to the next paragraph) the near wipeout of the human race in the mini-series to setting up a new government, living under a Cylon domination, seeing the rise of a religious cult, and finding out there’s even more Cylons deeply embedded in the fleet (and those get “unlocked” when they hear “All Along the Watchtower”). Some of the most devastating material happened within this last half-season: an Earth that was burnt to a crisp, Starbuck finding her own skeleton, a mutiny, the mass murder of most of the government, a suicide and what looks like the destruction of the Galactica itself.

Best of all the show has remained true to it’s mythology and never went off the rails like Lost or Heroes. I was never angered or  bored by BSG. In fact, there’s no way I could stop watching because the writing and the characters were so compelling that I had to know what would happen next. I hope (though I’m not hopeful) that the some 39,000 survivors of the destruction of the 12 colonies find some peace and happiness as the series winds up. What I am sure of is that I’m going to be satisfied with the series finale simply because I don’t think the creators would let it be any other way.

Farewell BSG may the gods be with you… so say we all!

Postshow update: No spoilers here… just saying the finale was near perfection. Two nice nods to history too (just like the mini-series): the museum piece Cylon Centurion showed up again as did the original BSG theme.