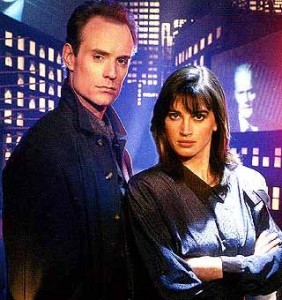 Max Headroom was everywhere in the middle 80s. I think I initially discovered him because he was the spokesperson for New Coke.

Not Max at his most interesting, certainly. He had a run at pop music too, showing up in the Art of Noise song “Paranoimia.”

That was fun Max, but also not his best.

The Max Headroom worth geeking out over is the short lived ABC series that ran for 13 episodes between March 1987 and May 1988. The show took the 1985 UK Telefilm as it’s jumping off point. The film featured Network XXIII reporter Edison Carter (played by Matt Frewer, who also played Max in all his different incarnations) working on a story about blipverts (or adverts in the U.S. version), which were ads that zipped by so quick they could cause some viewers to explode.

That story can’t get out and Carter is thought to be killed. The network downloads his memories with the intention of keeping a computerized (and therefore “controllable”) version of Carter on the air… what they end up with is Max Headroom. Why Max Headroom? When the computerized version is brought online, that’s all it can say. It happens the last thing Carter saw before blacking out is a barrier that said “Max. Headroom 2.3m.”

Of course, Carter wasn’t killed. He eventually escapes and returns to his correspondents job and his adventures “20 minutes in the future” fueled the TV series. (Of note, the original British movie paved the way for Max to host a music video/interview show on England’s Channel 4. That same movie was expanded for Cinemax and was the intro to Max hosting an interview show on that channel.)

As you can tell from those opening credits,while it was said to be “20 minutes in the future,” it was a good bit further out there with a bit of a Blade Runner look. The series dealt heavily in how media impacted the public, formed opinion and often times wielded too much power. It was a peek at a possible future in 1986 and even more relevant now as media has grown more influential, there are hundreds and hundreds of channels, and there are even more couch potatoes out there.

Here’s another sample of Max from the ABC series. At the end of most episodes, he had something to say about the main topic of the week.

The show was, unfortunately, too dark for TV and it died pretty quickly. There’s talk that a couple more were in the can and never aired. And, to date, the series has not become available on DVD. Only the original UK film is available at Amazon (though it is out of print).

Max did make a return recently to UK’s Channel 4 to talk about the digital TV transition. Check this out… it’s better than any digital TV ad I’ve seen here. I love that they made Max older (who knew a digital character could age) and his rant is perfect!