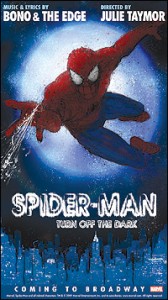 It’s been rumored for a while, but today it became official.

A Spider-Man musical is on the way. Titled Spider-Man: Turn Off the Dark is set to begin preview at the Hilton Theatre January 16, 2010 with opening night on February 18, 2010.

Julie Taymor, director of The Lion King on Broadway and the film Across The Universe directs. U2’s Bono and The Edge are doing the music and lyrics. The book will be by Taymor and Glen Berger. I have no idea what Berger’s credits are. He doesn’t seem to have written for Broadway before and IMDB lists a Glen Berger who has written for TV.

Rumor is that Evan Rachel Wood is cast as Mary Jane. No other potential cast has been announced.

This promises to either be really awesome or disastoursly bad. I find Taymor’s directing work uneven and pair that with Broadway novices Bono, The Edge and Berger and who knows what you’re going to get.

You can keep track of the goings on at the Spider-man on Broadway website.