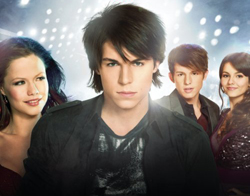 The mention in Entertainment Weekly prompted me to tune in for Nickelodeon’s attempt to stake a claim in Disney’s High School Musical space. The result was the movie Spectacular!, which premiered last Monday.

Who knew there could be so much drama around show choir? Actually, I’m not sure I was even aware of something called show choir before this movie (it’s a lot like a pop group with singing, dancing and sparkly costumes but done as a high school extracurricular).

I went in with pretty low expectations since I am a huge HSM fan. But Spectacular! was completely enjoyable and had some great songs and good moves (and did I mention sparkly costumes?). It’s less glossy than HSM, but it’s message is still good with some riffs on teamwork, thinking outside the box and keeping your promises.

Here’s a music video from Spectacular!… 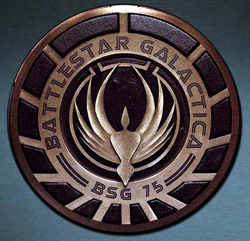 In more serious programming, Battlestar Galactica‘s final episodes have been nothing short of incredible. The writers are doing a great job wrapping up the show’s rather complex mythology between the final five Cylons (who probably should also be called the “original” five Cylons) and the other models as well as how all the humans factor into this.

BSG is also the most stressful show that I watch right now. Some episodes have been very tense: a burned out/nuked Earth, a mutiny, unexpected deaths. There are only four episodes left now and I’ve got major expectations that this series is going to end in stunningly satisfying fashion. I hope I won’t be disappointed because it could all go wrong in the coming weeks, but I have faith that there will be a sublime series finale. I hope the finale includes a glimmer of hope that these characters get some peace and happiness. I don’t think there has ever been a happy day on this show.

I am eager to see what the BSG crew cooks up for Caprica, a BSG prequel that arrives on Sci-Fi in 2010.

Kyle XY is a series that seems to be ending before it’s time. The show kicked off the second half of it’s current season in January and now comes word that ABC Family is canceling it. I have a fear that the producers didn’t get that word early enough to produce a true series finale and this show has a lot to tie up.

Kyle has been consistent in its seasons in building on the mystery surrounding test-tube kid Kyle and his growing physical and mental abilities. But without an ending to put a cap on the series it will be time wasted.

ABC seems to be fairly good these days as screwing the viewers (witness their treatment of Pushing Daises and Dirty Sexy Money on the parent network). They should just stop committing to serialized dramas if they’re not going to allow the stories to complete. 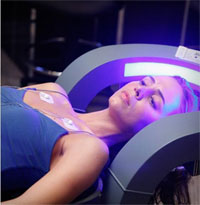 With some trepidation, I took on Fox’s new Dollhouse. I tuned in because it’s a Joss Whedon show, I came back this week for episode two because episode one held my interest.

I admit I feel like I’ve been tossed into the middle of something. In the opening scene, “Echo” is shown signing up to join the Dollhouse but she’s clearly not happy about it. So what’s the deal with that? I still have no clue. There’s also been a murderous run inside the Dollhouse by one of their own… but we don’t know much about that either. It’s very disjointed story telling so far. I don’t mind that too much, but I do prefer not feeling like I’ve missed an episode or two when I haven’t.

I am still a fan of the concept: an organization that has agents on standby and when called into service, the agents are imprinted with the personality and abilities required for the job. It’s not government work though. It a private corporation (or something) that, for a large fee, provides whatever their client needs.

However, Fox may not show this show much love. They’ve already stuck it on Friday night behind the lackluster Sarah Connor Chronicles. Does this show have a future? Even if it does, does Whedon have a plan for it so it turns out great like BSG and not a mess like Heroes? Is this worth my time, or am I going to regret this in a month?