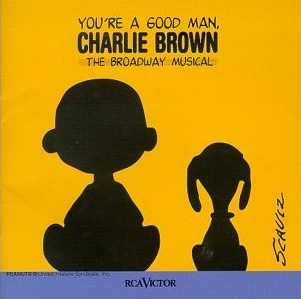 You’re A Good Man, Charlie Brown started out as a record album in 1966. It was billed as an “Original Album Musical” for MGM’s Leo record label and featured 10 songs by Clark Gesner. The record was adapted into a stage musical, which debuted off-Broadway on March 7, 1967. The musicalization of the classic Peanuts characters was a huge hit and it played 1,597 performances. Of note from the cast of that original off-Broadway company is Gary Burghoff (Radar from M*A*S*H) who played Charlie Brown.

The plot was a string of simple skits, exactly the sort of thing you’d expect to find in the comic strip: Charlie Brown lamenting for the little red haired girl, Linus going on about how important his blanket is, Lucy explaining the way the world works, Snoopy squaring off against the Red Baron, a baseball game and so on.

In 1971, given the success of the off-Broadway run, the show transferred to Broadway where it played 15 previews and 32 regular performances before it closed. Somehow the magic didn’t quite make the transfer.

Here are few nuggets in the You’re A Good Man, Charlie Brown timeline that I didn’t know about before I dug into the show for this write up:Hallmark Hall of Fame adapted the show for television in 1973 in a special that aired on NBC. The special featured some members of the off-Broadway company as well as some new cast members.  Next, in 1985, CBS debuted an animated Peanuts cartoon that featured the You’re A Good Man score. This program is important because it’s the first time that Snoopy had understandable dialogue in a Peanuts cartoon.

Here’s a look at the opening of the animated version…

Jump forward again to 1999, which is the first time I got to see You’re A Good Man, Charlie Brown (how I missed the ’85 cartoon is a mystery to me). For the ’99 Broadway revival, two additional songs were written (“Beethoven Day” and “My Philosophy”) and additional lyrics we written for “The Book Report” and “Little Known Facts.” Andrew Lippa provided the new songs as well as some updated orchestrations. Michael Mayer provided some new dialogue and directed.

The cast was amazing! Anthony Rapp ( in his first Broadway outing after Rent) was Charlie Brown, Kristin Chenoweth played Sally (a character that was not in the original production), Roger Bart was Snoopy, B.D. Wong played Linus, Stanley Wayne Mathis was Schroeder and Ilana Levine played bossy Lucy.

Even with the stellar cast and new songs, the show failed to catch on Broadway again. Despite a very family friendly schedule, which had the show running six of its eight performances on the weekends (including a Saturday 10am show), the show folded after only 149 performances. It closed the weekend after the Tony Awards, where it lost the Best Revival Tony (Annie Get Your Gun with Bernadette Peters took the honor). There were, however, Tony wins for both Chenoweth and Bart in featured actor categories.

I caught this show twice during its limited with the second visit coming on its closing weekend. That closing performance was one I’ll never forget. The audience let the cast know how appreciated they were with a lot of extended applause and mid-show standing ovations. There was also a technical glitch that provided an incredible moment. Roger Bart as Snoopy has one of the last songs in the show with “Suppertime.” Midway through the number his microphone failed. Once he realized it, he belted out the rest of the song as the orchestra lowered their overall volume so he could be heard better. I was in the back of the balcony and heard him just fine. It was theater like it used to be, before all the electronics. Luckily he had the voice that could handle the job with out amplification. For the final number, he was on stage holding his mic pack (I guess they couldn’t get it tucked away in his costume fast enough).

Also from that performance I got a signed poster featuring the entire cast.

Here’s a look at the revival cast from the 1999 Tony Awards. Kirsten Chenoweth sings the new song “My Philosophy” and then the entire cast joins here for “Happiness.”