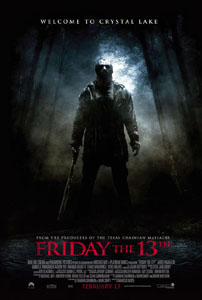 While I can be pretty freaked out by horror movies to the point where I won’t go see many of them, I have always enjoyed the Friday the 13th franchise (as well as Halloween and Nightmare on Elm Street franchises). So I was looking forward to the new Friday the 13th when it was announced. What made it even better is that it starred one of my favorite pieces of eye candy, Jared Padalecki (Dean from Gilmore Girls and Sam from Supernatural).

One of the questions I had about this movie going into it though was is it a remake, a reboot or simply a sequel? It was hard to tell. It has no number, so it didn’t seem like a sequel (if I’ve counted right, this would be number 12). But the ad campaign makes reference to some of the events from the end of the the original 1980 film… so maybe it’s a sequel after all.

Well, having seen it, I think I’ll settle on calling it a reboot sequel.

The movie opens with basically the scene that was the climax to the 1980 film: Jason’s mother getting her head chopped off by the lone counselor that remains. However, all of this material has been re-shot to put a different spin on history. The film moves to the present day and five people are out camping. Most of them are pretty quickly dispatched by a still pissed off Jason. All of this happens before the title card!

Jump forward six more weeks and you’ve got your typical band of randy, partying teenagers about to spend a weekend at a cabin near Crystal Lake. You’ve also got hunky Jared looking for his sister whose gone missing (she was part of that pre-title card outing). You can happens over the next hour: lots of blood spilling. 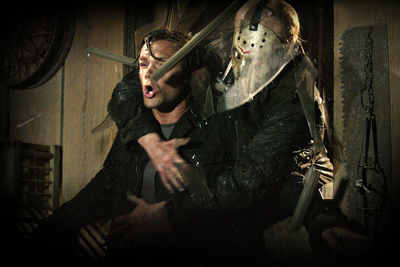 This Jason is a lot faster than previous incarnations and a lot more cunning with his kills, some of which are elaborate set ups like  bear traps and cooking someone over a fire. My favorite death: someone getting it while jamming to “Sister Christian” on their iPod.

So, with this movie opening solidly at #1 this weekend ($42.4 million, more than twice the #2 film), does that mean it all starts over again? Will the next one be Friday the 13th XIII or perhaps Friday the 13th 2.2? It doesn’t really matter… I’m sure I’ll turn out for whatever it is.