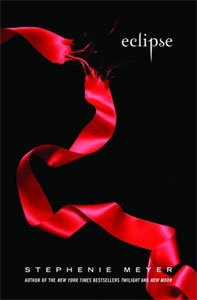 Eclipse by Stephenie Meyer is now my favorite book in the Twilight series. After the disappointment of New Moon, this was a pleasant and action-packed treat.

I loved getting Jasper’s and Rosalie’s back stories, which gave some much needed insight into their characters. I tried to like the werewolves backstory,  but that went on way to long for my taste and broke the pacing of the story. I understand that it was needed to explain some things, I just wish it could have been told a bit faster.

The best and fun part of the book was the werewolves and the Cullens joining forces to defeat the newborn vampires that Victoria made. It was excellent seeing the old nemsis from back in book one finally destroyed. The uneasy truce between the Cullens and the wolves plays out great and was very well written with just the right amount of respect and tension between the two sides.

The one odd thing about this book was the epilogue. Suddenly that was from Jacob’s point of view. I’m not sure why after a couple thousand  pages there were less than 10 in Jacob’s voice. It was interesting to be in his world for a moment, but it was strange.

Up next: It should be no surprise that I’m rolling right into the conclusion of the Twilight series with Breaking Dawn. (Will this become my favorite of the series? Check back in a couple weeks.)