Friday Geek Out: The Who’s Tommy 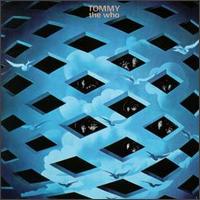 That deaf, dumb and blind kind sure plays a mean pinball.

I was first exposed to The Who’s Tommy when I saw the 1975 film, which starred The Who’s Roger Daltrey as Tommy Walker. The story of the young man who witnesses the death of his father and becomes traumatized to the point he becomes deaf, dumb and blind was dizzying… and confusing. I didn’t really get what I was seeing because I was only 11 or 12 when I saw this for the first time on cable TV somewhere around 1979 or ’80. I did love the music; but what was up with all that weird imagery, such as Ann-Margret’s (who played Tommy’s mother) hallucination of soap, beans, and chocolate flying out of her TV set. Actually, even some 20 years later, I still don’t quite get the point of that. The stars in the movie are pretty amazing: Jack Nicholson (as a doctor), Eric Clapton (the preacher), Elton John (a “local lad” who sings “Pinball Wizard”), Tina Turner (the Acid Queen) and the rest of The Who.

Tommy began life as a two album set from The Who. It was the band’s fourth album, released in 1969 (yes, that means this year it turns 40). The album, considered to be the first rock opera, was released to a mixed critical reaction and was banned for a time by the BBC and some US radio because of its very dark themes. It did have a huge commercial success, as did the movie. I didn’t catch on to the original album until it’s 20th anniversary when The Who did several live performances of the show. One of those was recorded for television and featured guest artists like Elton John, Phil Collins, Billy Idol, Patti LaBelle, and Steve Winwood. Right after that, I picked up the CD and got hooked on the original sound of The Who’s guitar rock.

The next Tommy experience for me was in late 1993 when I saw Tommy on Broadway. The show, which opened in April 1993 and ran just over two years, was nominated for 11 Tonys and won 5, including a Best Score Tony for Pete Townshend, Best Director for Des McAnuff as well as choreography, scenic design and lighting. Townshend getting a Best Score Tony would likely not happen today because the rules are much stricter that a score must be written for the stage, which Tommy really wasn’t. He did, however, write a new song for the show. “I Believe My Own Eyes,” is sung between Tommy’s parents, who are experiencing the stress of raising a disabled child during the 1950s.

The Broadway cast was amazing. Michael Cerveris made his Broadway debut as Tommy and got a Tony nomination for best featured actor. He went on to fantastic performances in Titanic, and the recent revivals of Sweeney Todd and Assassins as well as an amazing concert performance of Passion. Alice Ripley and Sherie Rene Scott, two of my favorite actresses, were in the ensemble.

Here is the Original Broadway Cast of The Who’s Tommy with their performance from the 1993 Tony Awards featuring a medley of songs.

The Broadway show celebrated it’s 15th Anniversary this past December with a one-night only concert at the August Wilson Theatre (home to Jersey Boys), featuring most of the original cast. I was sad that I couldn’t snag a ticket to that show (which was a benefit for Broadway Cares/Equity Fights Aids, the Broadway Dreams Foundation and the Bachmann-Strauss Dystonia and Parkinson Foundation)  because it was no doubt amazing!