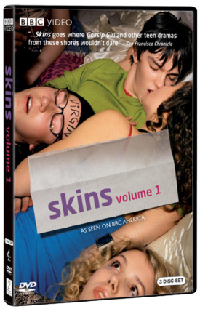 Will and I have written of our love of Skins a couple times. BBC America wrapped up the first two seasons a few weeks ago and I’m missing it a lot. I initially wrote of the extreme divide between Skins and the 90210 reboot and as Skins wrapped up it’s first year of episodes that gap just got wider. Skins is the best of the teen dramas currently out there with the final episodes of the second season  surpassing even the current season of Degrassi: The Next Generation.

The first season of Skins just arrived on video with nine episodes as well as some extras to round out the viewing experience. The second season, with 10 more episodes and still more extras, comes out in middle April.

Here’s a quick look at the world of Skins from a BBC America promo that aired when they started running the show last August. Keep an eye out in the trailer for a couple actors you might recognize: Nicholas Hoult who was the kid opposite Hugh Grant in About a Boy (and here he is all grown up). There’s also Dev Patel who has become a breakout star since Slumdog Millionaire was released to such massive acclaim.

Skins starts all over again this spring with Season 3, which features a whole new set of teens. Here’s the teaser trailer for the new season (sadly I can’t find one that will let me inbed the clip, so you’ll have to hop over to YouTube to watch it… but it’s worth the trip).

So if you haven’t experienced the TV pleasure that is Skins, pick up these DVDs and check out the first two awesome seasons before the third one gets underway.