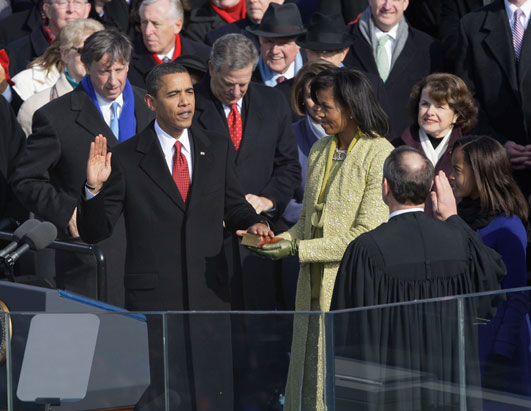 President Obama’s speech was awe inspiring. I wanted to share the parts that really stood out for me as I listened:

“Our economy is badly weakened, a consequence of greed and irresponsibility on the part of some, but also our collective failure to make hard choices and prepare the nation for a new age.”

“The time has come to reaffirm our enduring spirit; to choose our better history; to carry forward that precious gift, that noble idea, passed on from generation to generation: the God-given promise that all are equal, all are free, and all deserve a chance to pursue their full measure of happiness.”

“The question we ask today is not whether our government is too big or too small, but whether it works — whether it helps families find jobs at a decent wage, care they can afford, a retirement that is dignified. Where the answer is yes, we intend to move forward. Where the answer is no, programs will end. And those of us who manage the public’s dollars will be held to account — to spend wisely, reform bad habits, and do our business in the light of day — because only then can we restore the vital trust between a people and their government.”

“The success of our economy has always depended not just on the size of our gross domestic product, but on the reach of our prosperity; on our ability to extend opportunity to every willing heart — not out of charity, but because it is the surest route to our common good.”

“For we know that our patchwork heritage is a strength, not a weakness. We are a nation of Christians and Muslims, Jews and Hindus — and nonbelievers. We are shaped by every language and culture, drawn from every end of this Earth; and because we have tasted the bitter swill of civil war and segregation, and emerged from that dark chapter stronger and more united, we cannot help but believe that the old hatreds shall someday pass; that the lines of tribe shall soon dissolve; that as the world grows smaller, our common humanity shall reveal itself; and that America must play its role in ushering in a new era of peace.”

“Know that your people will judge you on what you can build, not what you destroy.”

“For as much as government can do and must do, it is ultimately the faith and determination of the American people upon which this nation relies. It is the kindness to take in a stranger when the levees break, the selflessness of workers who would rather cut their hours than see a friend lose their job which sees us through our darkest hours. It is the firefighter’s courage to storm a stairway filled with smoke, but also a parent’s willingness to nurture a child, that finally decides our fate.”

“What is required of us now is a new era of responsibility — a recognition, on the part of every American, that we have duties to ourselves, our nation and the world; duties that we do not grudgingly accept but rather seize gladly, firm in the knowledge that there is nothing so satisfying to the spirit, so defining of our character, than giving our all to a difficult task.”

Besides the speech, the Obama administration did another great thing yesterday. At a little past noon ET, the White House website was updated to reflect the new administration. Within the “Agenda” section is a outline of the goals regarding Civil Rights and on the page are President Obama’s goals for the LGBT community (scroll down the page about half way). “While we have come a long way since the Stonewall riots in 1969, we still have a lot of work to do. Too often, the issue of LGBT rights is exploited by those seeking to divide us. But at its core, this issue is about who we are as Americans. It’s about whether this nation is going to live up to its founding promise of equality by treating all its citizens with dignity and respect.”

Just one more thing to be proud of on such a historic day.