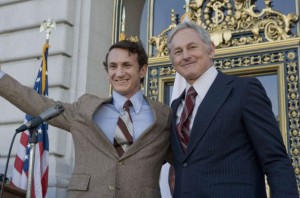 That’s just one of the messages you get from the Gus Van Sant film Milk. It’s interesting, and sad, that we still need to hear that message 30 years after city supervisor Harvey Milk and San Francisco mayor George Moscone were murdered in City Hall.

The film is as good as all the critics say. Sean Penn embodies Milk. I’ve seen the Milk documentary The Mayor of Castro Street and Penn channels all of Milk’s charismatic energy to great effect. Beyond portraying a critical time in the gay rights movement, the film aslo shows how one person can make a difference by standing up for what’s right and mobilizing others to join the cause. Milk was tired of the community being marginalized, discriminated and beaten down. He fought for years to get elected to office and then he put the spotlight on our issues and started a movement.

Now I’m left wondering where the 2009 version of Harvey Milk is. Sure, LGBT people are elected to public office, but who is taking up his leadership position to mobilize the community? He stood up against Prop 6 in 1978. Prop 6 sought to ban gays and lesbians (in addition to anyone who supported them) from working in California’s public schools. Milk and his supporters were instrumental in it failing in the California general election. Would he have been able rally the troops to defeat Prop 8 this past November? Given all the strides that have been made for LGBT rights in the past 30 years, it is strange that there is no one out there like Milk to rally us to keep moving forward. Perhaps this film will inspire someone to pick up the bullhorn and start recruiting people.