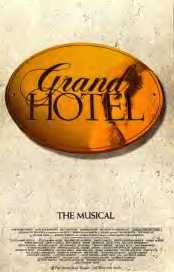 One of my fondest Broadway moments was seeing Grand Hotel in the summer of 1990.  This musical was  based on the Oscar winning 1932 movie of the same name which starred Greta Garbo, John Barrymore and Joan Crawford. The show focuses on the guests at the Grand Hotel: a fading ballerina who needs to be convinced that she can still dance, a broke baron, a seriously ill bookkeeper, a businessman on the verge of ruin. They’re all spending their moments of despair in Berlin’s Grand Hotel.

As you can see, all of these characters are in some sort of distress, making for a fairly dark and desperate musical… and I loved it.

The show was directed and choreographed by Tommy Tune, who managed to steer the show through numerous disagreements with its writers to create a musical that picked up 12 Tony nominations in 1990. The cast was amazing as well. David Carroll as the Baron, Michael Jeter as the bookkeeper, Liliane Montevecchi as the ballerina and, in a supporting role, Jane Krakowski. Each of those actors, as well as Tune, were all nominated for Tonys. Tune won for both direction and choreography; Jeter won featured actor. (City of Angels won for Best Musical that year, beating Grand Hotel, Aspects of Love and Meet Me in St. Louis.)

Jeter was amazing in the show and I am glad I was able to see him perform his Tony winning role. He was heartbreaking and funny and with the “We’ll Take A Glass Together” number stopped the show with some amazing dancing. Here is Jeter and the Grand Hotel company performing at the 1990 Tony Awards. (The video is a little dark, but hopefully you get the idea of how awesome this is.)