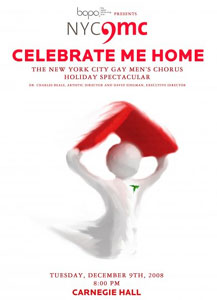 The concert certainly lived up to its “spectacular” billing. There were, of course, holiday classics performed: “It’s Beginning to Look A Lot Like Christmas,” “I’ve Got My Love to Keep Me Warm,” “Sleigh Ride,” “Christmas is Coming,” “Jingle Bells,” “Silent Night” and “The 12 Days of Christmas,” “The Christmas Song” and “Joy to the World.”

With its Celebrate Me Home theme, the concert included several songs from around the world, such as Ladysmith Black Mambazo’s “Homeless,” three Basque carols from Spain and even some carols from the 16th and 17th Century that resonate about home. Kenny Loggins’ “Celebrate Me Home” was done with a stunning solo by Benjamin Smith. It featured several brief stories from members of the chorus relating what the holiday and home mean to them.

The cast of [title of show] contributed an original holiday story, written by Susan, about third grade freaks, geeks, a pre-holiday book report and the redemption of the king of the third grade geeks, boy division. Heidi also performed “The Christmas Song” beautifully as well as singing a solo in the closing number: ABBA’s “Happy New Year.” Don’t the [tos]sers look great in their holiday finery? You can read Heidi’s account of the evening on the [title of show] [blog]. 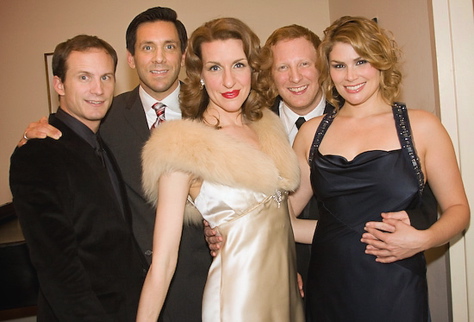 It was a wonderful evening and a perfect way to get into the holiday spirit. I’m glad we finally got to Carnegie Hall too. Even though we sat way up in the balcony, we could still see and hear perfectly and the Hall is, as you can imagine, simply amazing.