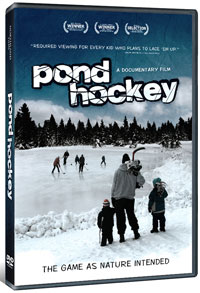 I’ve been hearing about the film Pond Hockey on and off for the past couple months and finally watched the trailer today. The documentary looks amazing and I’m putting the DVD on my Christmas list.

I’ve only played outside a few times in my hockey career. The Ordinals occasionally practiced/scrimmaged up at Lasker and that was a lot of fun. I think some winter soon I’m going to have to sign up to play on a Lasker team so I can get more of the outside experience. There was also the time the NYCGHA filmed a sequence for the Graham Norton show–in the middle of a blizzard–on the Rockefeller Center rink.

Some of Neutral Zone, the novel I’ve been cranking away on, has pond hockey in it too. It’s such a rite of passage in hockey-heavy parts of the country, I had to include some key scenes on a pond. It seemed like the right thing to do as I wrote and as I’ve been reading back over it, those scenes are some of my favorites.

Watching this trailer makes me want to get outside and play and recapture a bit of childhood that I never indulged in. Check it out: