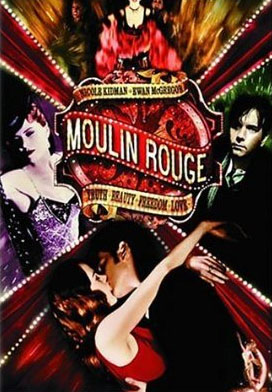 Moulin Rouge! is one of my all-time top films. How could it not be: singing, dancing, sweeping love story and Ewan McGregor. I was excited enough by this June 2001 film that I made sure we saw it the first time at New York’s Ziegfeld Theater, which a huge, single auditorium theater in midtown. It’s the coolest place to see movie, it’s just not that convenient. It was the right place to see this movie, however: grand theater for a grand movie.

That Baz Luhrmann directed Moulin Rouge! was also a major reason to see it. This is considered the third part of the Red Curtain Trilogy, which includes Romeo + Juliet and Strictly Ballroom. While these films don’t share a common plot, they all share Luhrmann’s visual style and very particular director’s point-of-view. That style was also realized on stage with a fantastic take on La Boheme. This weekend Luhrmann is back in movie theaters with Nicole Kidman and Hugh Jackman in Australia.

Back to the extravaganza that is Moulin Rouge! McGregor plays a writer who becomes smitten with Kidman’s courtesan. He starts to work on a musical extravaganza for his love. Unfortunately, there’s a possessive baron who feels he owns the courtesan. And, to top it off, she also happens to be deathly ill. It’s a tragedy waiting to happen that’s surrounded by can-can’s, tangos and a take on Elton John’s “Your Song” that is fantastic!

This film, with it’s modern score (including new takes on songs from The Police, Madonna, Marylin Monroe and others) helped reignite musicals on screen paving the way for 2002’s Chicago and the string of musicals that came after it.

Here’s a look at one of my favorite scenes of the film: Ewan and Nicole signing “Come What May.”