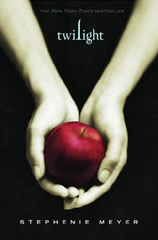 As planned, I finished Stephenie Meyer’s Twilight just a few days ahead of the movie. Simply put, I loved this book. It’s a simple plot: human girl falls in love with vampire boy (okay, he looks like a 17-year-old but is quite a bit older as you would expect from a vampire).

The push and pull between Bella and Edward that ran through the middle of the book was a pleasure to read. This was unlike any other courtship, of course, because Bella had to get an understanding of Edward’s vampire side and of his not-quite-so-normal family.

The tone in which Bella and Edward’s story was written reminds me a lot of the Beauty and the Beast TV series. Bella and Edward come across a lot like Catherine and Vincent. This is the case not only when they are simply talking to each other and “being in love,” but also in Edward’s fierce protection of Bella as well as in Bella’s determination not to let Edward go.

I did think the “hunt” that takes up the last third of the book was over a too quickly. I would’ve liked to see exactly what happened to James when the Cullen’s rescued Bella (I’ve heard Meyer has a version of Twilight from Edward’s point-of-view and I would love to read that… and it looks like the movie will go there too). More time with the Cullens in general would’ve been cool. I understand it’s Bella and Edward’s story, but the samples of Edward’s home life were fascinating, especially the baseball game.

I admit, I have issues with how Meyer has tweaked vampire lore to make this story more plausible. Let’s face it, vampires do not come out in the sun (even in the cloudy regions of the Pacific Northwest). I let this go as I got into the book because the plot was good enough that I was able to ignore this tweak. I will say I was surprised that Edward sparkles in the sun. That was a cool twist. I thought it would be something more grotesque instead of beautiful.

I can’t see how it’s going to live up to how much I enjoyed the book. My favorite parts were Edward and Bella just talking and being quiet with each other and that doesn’t strike me as the part of the book the movie will focus on.

Up next: the vampire reading continues as I move on to Meyer’s New Moon