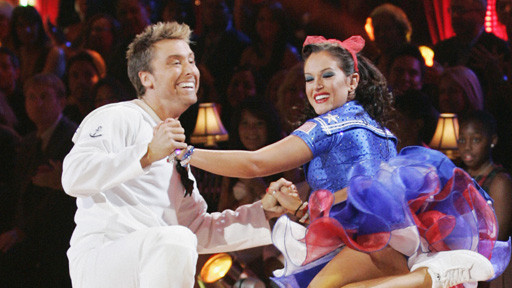 The semi-finals of Dancing with the Stars belonged to Lance. He got his first 10s, ended up at the top of the leader board six points ahead of the competition and landed a spot in the finals.

This week everyone had two dances: a latin one they had not performed before and one of the new dances to the show this season. Here’s the rundown of the performances.

Brooke: The Jive was a mess. She tried to go for performance because she knew the guys all had performance quality on their side. Unfortunately she lost her precision and that made the whole thing look bad. She bounced back with the Salsa. It was perfect, classic Brooke and it was an awesome performance.

Cody: Poor Cody. He’s been loosing his position in the finals for the past couple weeks and Monday was the end of the road. The Paso was a disaster. I didn’t like the song. I didn’t like choreography. Basically, I hated it, and so did the judges. The Salsa was okay, but he looked uncomfortable in parts, especially the lifts. It was not the material that the semi-finals require.

Warren: His Mambo was fun and enjoyable and he moved his feet pretty well. Yes, he still got judges complaints, but I thought he looked good. The jitterbug was also a rockin’ good time. He played the part so well here and he threw Julianne around like a pro.

Lance: Wow! I didn’t think he’d make it into the finals, but the last two weeks have been excellent for him. Tonight’s Mambo was spot on perfection. But it was the Jitterbug that pushed it over the top. Dedicated to his grandfather, who was in the audience, Lance danced right through loosing a shoe bringing home the best performance of the night.

Results show: Great music tonight! Aretha Franklin was fantastic as were the dancers that backed her up (it was especially great to see Kristi back with Mark for a one-night only performance). Julianne performed her debut single, “My Halleiluh Song” and it was great backed up with her brother, Mark and Lacey. Leona Lewis sang “Bleeding Love,” which has become a favorite of mine. However, even Maks’ choreography couldn’t get the memory of Chelsea & Mark performing to that song on So You Think You Can Dance.

Next week it’s Brooke vs. Warren vs. Lance for the finals! A few weeks ago I had Cody in Lance’s slot, but I think the change in partners threw him off his game. Now I’m not sure how to call it because each of these stars has something going for them. For me, it’s going to come down to the freestyle dance to decide who is going to win. My early bet is on Brooke, but it’s really anyone’s game.