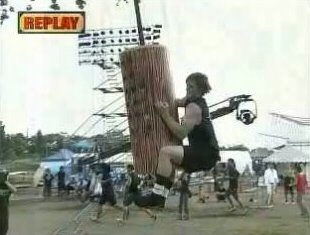 There’s been much anticipation this month since G4 announced that Ninja Warrior 21 (or Sasuke 21 if you prefer the Japanese title) was scheduled to air this past Wednesday. I’ve written before how much I’ve fallen in love with Ninja Warrior. The insane obstacle course is a thrill to watch as 100 competitors give it their all to get through the four stages.

In tournament 20, it was an American sent by G4 who went further than anyone else, including the Ninja Warrior all-stars. Levi Meeuwenberg failed in the middle of the third stage.

For tournament 21, G4 sent four American warriors, including Levi, as well as the hosts from Attack of the Show to compete.

The course for tournament 21 didn’t change. Since so few people got through even the first stage in 20 it was decided to leave it as is. As usual, it was great, tense fun watching the tournament and I can’t wait for #22 in the spring. If you haven’t seen the craziness that is Ninja Warrior, you can check it out on G4’s Ninja Warrior site. Below is a sample: Levi’s stage 1 run, which is very impressive! No spoilers here for the outcome of the tourney, but I will say it that it did have some unexpected twists.