Fathom’s Five: The Cross of Sins by Geoffrey Knight 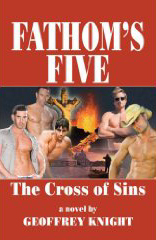 Fathom’s Five: The Cross of Sins by Geoffrey Knight was a fun read. The book is a mix of Indiana Jones, The Mummy and Saturday afternoon action/adventure movies with a good dose of erotica thrown in as well.

The Fathom in the title is Professor Fathom, a super smart, blind professor who is interested in history and artifacts. He’s assembled a team of experts that specialize in ancient mysteries and treasures: Luca, a art expert; Eden, a biologist/physician/genetic engineer; Shane, a cartographer; Will a history buff; and Jake, a treasure hunter. In this adventure, the five are out to find a religious artifact that is so controversial, it’s artist was killed shortly after the piece was created. After hundreds of years lost, the mystery of it’s location has been solved. Now Fathom’s Five has to find the piece before it is destroyed by a group who doesn’t want it to see the light of day.

I don’t often read adventure novels, but Will suggested I give this a try. It was loads of fun as the five traveled around the world trying to stay one step ahead of the bad guys. Of course, they were thrown into peril a lot and seeing how they’d work their way out of bad situations was a kick (How do you get out of an underground vault that is filling up with water at a rapid rate… not to mention that several team members are injured?).

This is the first in a series that Knight is writing and I’m already looking forward to The Riddle of the Sands.

Up next: Twilight by Stephenie Meyer (this way I’ll have read the book before the movie comes out!)