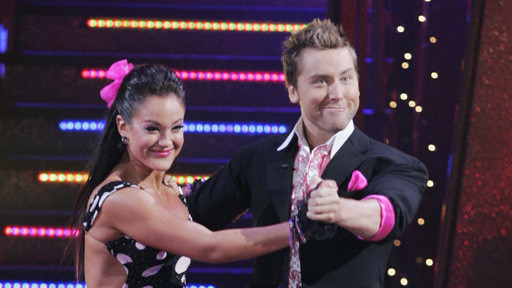 Except for the rumba, there was a different dance style for everyone this week on Dancing with the Stars. It was good to see such a variety on display.

Maurice started things off with a good Viennese Waltz. This is the second week I’ve felt he improved and it’s been good to see. He and Cheryl just need a little more chemistry between them. Based on the rehearsal footage though, I’m just not sure that’s possible.

Lance and Lacey got some redemption for last week’s debacle with a great jive. She finally let Lance shine and it paid off with a solid routine and good scores.

I don’t know what the judges were thinking with Susan. Her mambo still had her firmly in her glass box to the degree that it was just plain boring. Shatter the box or please just go home.

Derek had clever choreography for Brooke’s rumba. With her foot injury, he wisely kept her movements to a minimum. Unfortunately you could still see pain across her face occasionally and she wasn’t quite up to the standard she usually has. Guest judge Michael Flatley gave them a 10 anyway, but Bruno and Carrie Anne who knew what she could do only gave 8s. Still, it was a beautiful dance.

Cloris needs to go home. The cha cha cha was a mess. Carrie Anne was right that it was a disappointment that Toni, a better dancer, was sent home last week and we ended up seeing Cloris under perform. Yes, I enjoyed her past two weeks of performances, but then we were back to painful this week.

Cody was a ball of intensity. Some of the judges didn’t like the intense style for the samba, but I enjoyed it. Bruno pointed out it leaned towards a paso doble, which might be why I liked it so much. Luckily the scores weren’t bad, so he’s likely still a major contender. We’ll see what happens next week when he shifts over to Edyta for a partner while Julianne recovers from surgery.

Warren and Kym dished out a sexy rumba. Warren hit a couple of faulty steps along the way, which he gave away with some facial expressions but on the whole it was a fantastic performance that was very sensual. This guy just continues to impress.

The true disaster of the night was the group hip-hop. It might have looked good on the stage, but it was hard to follow on TV. A couple things were clear: Susan was a mess and was completely out of step in the first half. Cody looked great because this just tapped into his youthful energy. It was wise to keep Cloris at the top of the stairs so she was out of the way. Lance was also good because this was exactly his comfort zone because of his N*Sync experience. It was hard to tell, due to the camera work, how anyone else was performing. Sadly, we got to revisit the disaster since this was done as the encore dance. It was not better the second time around.

In other results show items: The Pussycat Dolls/Missy Elliot number was a bore. The kids were great as always–that cha cha cha was pretty awesome! Michael Flatley was on fire (literally) with some clickty-clacky dance.  And, Cloris was cast out of the ballroom… after this week’s dance it was time.