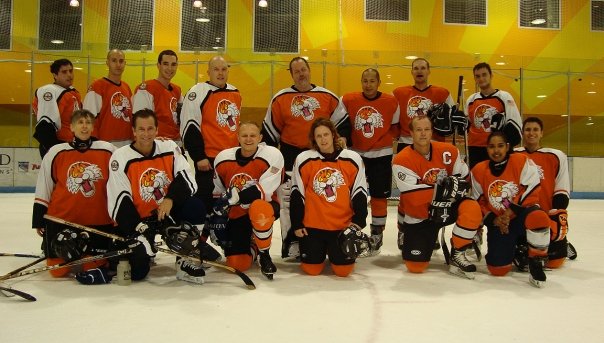 The Tigers had a rough game last night. We went out and played a pretty good agressive game, but we just couldn’t get on top of the Scapegoats. It was a fun, fast moving game though. I felt I had a good game myself. I made a couple of offensive rushes and, while I couldn’t convert those into goals, the shots I had were pretty good and made the goalie take action. Sadly I was on the ice for two of the six goals we had against us … and one of those I should’ve been able to stop. Speaking of the Tigers, above is the team picture we shot last week.

Ronnie’s Ice was a good time, of course,  yesterday morning. With 20 people there, it’s the second week we didn’t get to do small games, which I miss. But the number was perfect for the scrimmage, which was a five-on-five game. That was a pretty good game too. I had issues in the drills and even early in the scrimmage with reading the plays right, but I finally got into the groove before it was done.

Already looking forward to next week… Ronnie’s plus the Tigers and Ordinals both play.