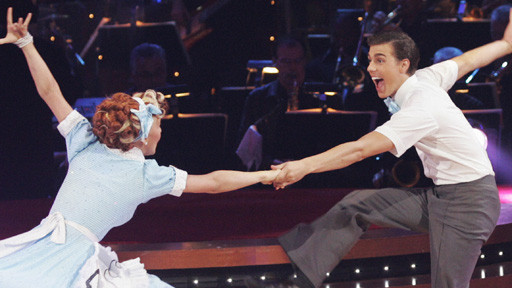 What a fun week! Dancing with the Stars rolled out four new dances this week. Not only was this a challenge for the stars, but the pros had their work cut out for them too since they’d never taught these dances before.

The night started out bumpy with the West Coast Swing. Poor Lance… not only did he fall, but he looked mildly uncomfortable with the dance. Lacey didn’t help him either since she seemed to mostly showcase her self (I agree with the judges on that). Then Toni came out and seemed to not have much content to her dance. It was just boring really.

The Hustle was next. Susan went back to timid and didn’t see to have much fun here at all, which meant I didn’t either. Warren… thank God for Warren. He brought some life to the show was his fantastic Hustle. It was nice to see him bounce back after falling short last week.

Cloris tore up the Salsa. She’s really starting to hit her stride these past couple weeks. I’m glad she’s stuck around long enough to show us she can really do this. It was her best dance yet. Maurice finally redeemed himself too. Cheryl was hard on him during rehearsals this week and it paid off because this was his best dance of ever.

The best of the night came last with the Jitterbug. The Houghs were against each other in this dance, and neither of them had ever danced it before. Derek and Brooke were out first and were their usually stunning selfs. They got two 10s and a 9 for their efforts. Julianne and Cody (pictured above) then came out and got a 10 and two 9s for their energetic and fun dance. The past couple weeks have been really good for Cody as he’s shown he can be good in a very structured dance (the tango) and good in a more free form dance like this one.

As the competition rolled past the half-way point, it was good that Toni left. She was static in the middle of the pack and it was time for her to go. If Susan doesn’t pick up her game next week, I think she needs to go next week. It was good to see the voters put her into the bottom two. It surprised me given her large fan base… at least it means people are paying attention to the dance!

I have come up with picks for final three too: Brooke, Warren, Cody.