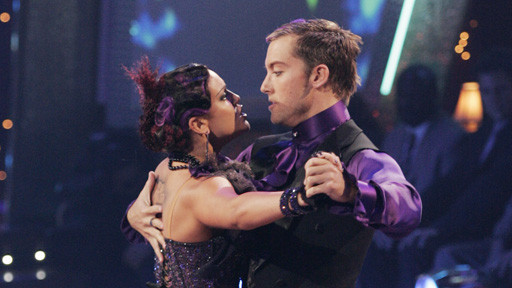 It was a pretty amazing week 4 with Sambas and Tangos on the agenda. All of the tangos came off looking great and gave each of the dancers their best performances of the competition so far. Lance and Lacey, however, had the best of the night with a funky, purple and energetic tango that satisfied all three judges. Cody rolled out a sharp, aggressive tango. Cloris, in a surprising turn, delivered a wonderfully good tango… even better than the passable paso doble she did two weeks ago. Meanwhile, Susan performed the “Erica Kane Tango,” which was full of drama, flair and don’t-mess-with-me attitude. 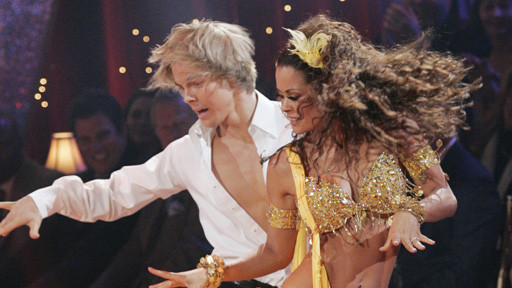 For the Sambas the results were not so good as some couldn’t get this party dance down. Thankfully, that was not the case for Brooke and Derek who sizzled. None of the pictures available from abc.com capture this adequately, but Brooke worked the dance to it’s fullest potential. And Derek transformed from nerd into red-hot Samba guy. It’s the first dance of the season going on to my DVD compilation. Toni had the next best Samba. It’s great to see her letting go more. She loosens up more every week and, with a good word from her doctor on her blood pressure, she really embraced the party this week. The two athletes didn’t do as well. I enjoyed Maurice’s disco samba for its entertainment, but the judges didn’t care for it. Warren had his first failure. While he still lit up the floor with his personality, there just wasn’t enough content. I agreed with the judges that Kym seemed to do most of the work in that performance.

Meanwhile, in the results show I was glad the kids competition returned. Two under-13 couples did the samba for this week. I was glad to see the couple where the boy did ice hockey and ballroom dancing won! The flamingo dance group was hot, hot, hot. Seven, buff and shirtless guys dancing… what’s not to like about that? And, Rocco went home. No big surprise there that it was a repeat of last week’s results.

Next week, four new dances are being introduced to Dancing with the Stars: the hustle, the jitterbug, salsa, and West Coast swing. It’ll be fun to see what the couples do with these new styles.