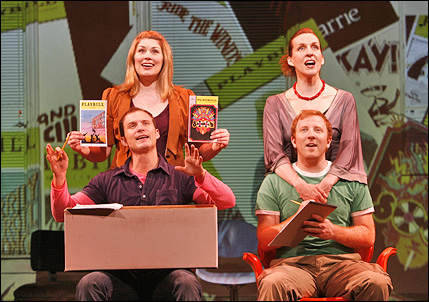 We were there during the first weekend of previews. We went back for our wedding anniversary in September. Tonight we went back for the final [title of show] performance on Broadway.

It was awesome to the see the Lyceum Theater filled to capacity with people like us who have become [tos]sers over the past few months, or in some cases years if they’d caught onto the show in its earlier off-Broadway or festival incarnations. As soon as Larry Pressgrove, the keyboardist, walked on stage to thunderous applause, it was clear it was going to be a spectacular evening. As soon as his applause died down, the stage went dark and the applause kicked into overdrive as the show’s stars and creators Hunter Bell and Jeff Bowen took their places. As soon as the lights went up, a standing ovation held them in place for several minutes before they could begin “Untitled Opening Number.”

The normally 90 minute show expanded by 10 to 15 minutes because they had to keep holding for laughs and applause. I suspect if it wasn’t for the blackouts in the show, there would have been more standing ovations. Susan Blackwell, as soon as she said “Die Vampire, Die” got huge applause that delayed the start of the song.

As the show got closer to the end, the applause only got more intense. As soon as Heidi Blickenstaff finished “A Way Back to Then,” the crowd was on its feet, freezing the cast in place once again for several minutes. The emotions ran higher still as Jeff started “Nine People’s Favorite Thing” only to have his voice crack as he worked to hold back tears. Again, as soon as that song ended, the next standing ovation kicked in and held the cast longer before letting them roll into the one-minute “Finale.”

They were all weeping and loosing their voices a bit for “Finale” as they had to sing “And now we have to let go / This is the last line of our show.” Of course, the crowd was up again for sustained applause.

It’s been a long time since we went to a closing performance, and none of them had the emotional power of this one. I wept a couple times at a various points in the show, but once the music started for “A Way Back to Then,” I was a goner along with many others in the audience.

The post-show thank yous and speeches were great and made it clear that [title of show] will live on. They’ve already decided to proceed with the [title of show] show season two. Plus they are looking at other ways to get [title of show] out there so more people can experience it. They sum it up perfectly in “A Part of it All.” “A part of the day they post the closing notice / A part of wanting to throw the towel in now and then / A part of knowing the way we’ll stay afloat is / To rise back up and just start over again.”

[title of show] will definitely live on for me. It’s in heavy rotation on my iPod. The signed poster hangs over the desk at home. I’ll approach my creative life with the mantra of “Die Vampire, Die!” And I’ll keep doing my part to tell nine people about this fantastic show.