I was introduced to BBC America’s Skins with its premiere in mid-August. The CW rolled out the new 90210 a couple weeks later. I just finished the first season–9 episodes–for Skins this week while 90210 has hit its first rerun cycle after 7 episodes. I have to say, I’m head over heels for Skins while 90210 is like a car wreck I can’t stop watching. I was faithful for the 10 years of the original 90210, but the new one pales in comparison. At times I feel like I’m stuck watching an episode of The Hills or some other flunky series 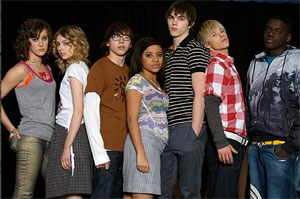 Let’s look at the far better Skins for a second. This is about a gang of eight 17-year-olds from Bristol. These kids go through it all–the party, the get in trouble, their parents can be supportive or totally abandon them, one of them is crazy, one of them is gay, they’re are a mixed group as the cast photo shows. They fight with each other, but when it matters they stick together. The whole thing has an air of realism… hyper realism but realism none the less. Granted, I don’t know what it’s like to grow up in Bristol, but the show is compelling. It jumps off the deep end with it’s cliffhangers too as the leader of the pack, Tony, got rammed by a truck while he was talking on the phone. If the DVR missed the show on any given week, I’d be upset. I’m psyched there’s no space between the seasons as BBC America rolls right into season two on Sunday. 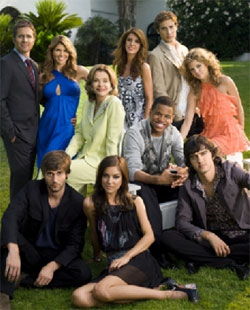 90210 on the other hand started with the same premise as it’s parent. A family transplanted to Beverly Hills. Although in this case, it’s a return to Beverly Hills for the dad who has brought his family from Kansas so they can “take care of” his mother (I’m not clear why she needs to be taken care of…she’s rich, living in mansion…I have the feeling she doesn’t know why she’s being taken care of either). 90210 also brought Kelly and Brenda into the fold so there’d be continuity to the original and that’s been the more compelling part of the show. They’ve mixed the cast a bit too, but it’s still a very white show. I’m not sure exactly what’s missing, except none of this seems real. There was a lot of the original that clearly didn’t feel real either, but in comparison the original was brilliant television. In the pseudo-cliffhanger this week, someone is in the midst of drug overdose because she can’t handle the pressure. The original handled this type of plot much better. Skins handles its addictions tremendously better. If 90210 failed to record one week, I’d shrug and wait to pick up the next one. Yes, I’m still watching. Like I said I can’t quite turn away from it. But I wish it was a better show and that I felt more tied to these characters. I was with the Skins characters in one episode. Seven in on 90210 and I still can’t tell you everyone’s name.