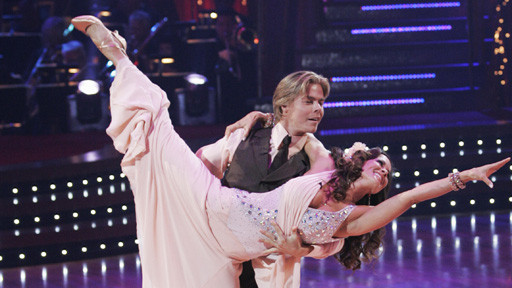 It was a sad week in the Dancing with the Stars ballroom this week as Olympic volleyball champ Misty May-Treanor left the competition as the result of a serious injury sustained during a rehearsal. She ruptured her Achilles tendon while working on her jive routine. The footage of the rehearsal was painful to watch and hear, as you can hear the pop of the tendon. On Tuesday’s result show we got to see the routine she was working on with Maks as Maks and Edyta performed the number.

It was a week of jives and Viennese waltzes this week and it was a good week of performances. Derek and Brooke lead the way with a beautiful dance (yes, it was the waltz that made me cry). Also impressive were Warren, once again showing this guy knows how to move; and Toni with a slightly edgy but fantastic waltz, unfortunately Len and Bruno were not as impressed as Carrie and I were. Cloris was a mess this week… she needs to be voted out. And Lance… I liked it a lot. They delivered some choreography that stuck to what a Viennese waltz should be and it was good!

For the jives I liked Maurice’s the best. Cheryl created some great choreography. Cody’s started out really good, but it was a little redundant and he seemed to be working a little too hard to make it work. Susan’s was good too, I just wish she’d let go (I think I write that every week!). Rocco was okay, but nothing great. It turns out if there had been an elimination this week, he would have gone home.

The results show was good. Jennifer Hudson’s new song is great as was the routine by Derek and Julianne! Kool and the Gang was fun. And, of course, you can never go wrong with the Rockettes.