David Sedaris “When You Are Engulfed in Flames” 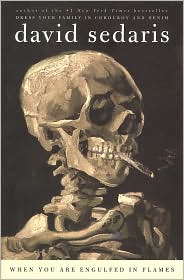 It’s always a good read when a new David Sedaris book comes out and When You Are Engulfed in Flames was no exception. This book is quite the collection of essays, ranging from his attempts to quit smoking while living in Japan to his experiences with a bizzare babysitter to attempts at learning both French and Japanese.

“Buddy, Can You Spare a Tie?” hit close to home for me as it talked about fashion mistakes. I don’t think I’ve ever made choices as bad as some of the ones Sedaris talks about, but then again when I’m making major clothing choices I always take Will with me too. Sedaris has ended up with euro-style glasses, a fake fanny and an unfortunate bow tie.

Another favorite is “That’s Amore” about a neighbor Sedaris and his boyfriend Hugh had while living in New York in the early 90s. Helen was in everybody’s business and was also demanding that she be helped in any way needed . Everyone has neighbors like that now and then, but this was an extreme instance. Helen thrived on causing trouble any way possible even for small infractions, such as a delivery boy “stealing” her pen. Sedaris mined this neighbor well for material though. You read this essay and wonder how people like Helen manage to get through live.

With work being so intense over the past month, it has been great to escape into Sedaris’ world and enjoy pieces of his own life.

Up next: Fathom’s Five: The Cross of Sins by Geoffrey Knight