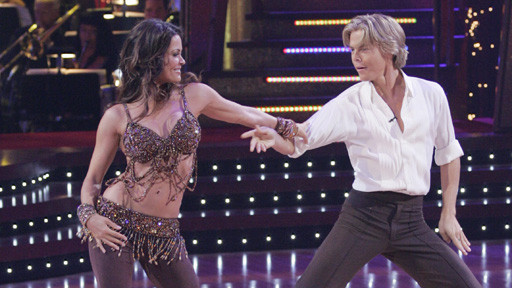 Dancing with the Stars season seven got underway this week with a three night premiere. I was leery of this batch of starts, but that was misplaced as this season’s competition got off to a good start.

Among the dancers I liked: Lance Bass, Toni Braxton, Brooke Burke (shown above with Derek Hough–love his new longer hair!), Maurice Green, Kim Kardashian, Cody Linely, Misty May-Treanor and Warren Sapp. Stand-outs of that group were Warren (for a such a big guy he’s doing a great job, particularly that quickstep), Cody and Julianne were just too cute and Brooke and Derek became the couple to beat in the early rounds.

There were disappointments too. Susan Lucci was unexpectedly stiff and seemed unsure of herself. I saw her a few years ago in Annie Get Your Gun and she was much more self-assured there. Jeff Ross was just a mess and I was glad to see him gone on night 2. Ted McGinley was mediocre, though I was surprised he got booted on night 3. Rocco was not good on night 1, but stepped up his game on night 2 and I expect him to move out of this group next week. Cloris Leachman was borderline offensive. She needs to remember she’s on a live, family show and start behaving appropriately.

The pro dances on Wednesday night’s show were great. The opening “Under Pressure” number had great choreography. It was nice to see Ashley DelGrasso back dancing with her partner to the Jesse McCartney number. A handful of the pros also danced to the Jonas Brothers and that was great too.

I’m looking forward to seeing where this goes! It’ll be a DVR season for the most part. I find that I just can’t listen to Samantha babble so it will always be a day or so before any commentary hits the web from me.