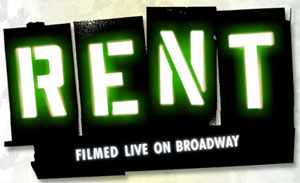 The final performance of Rent screened in movie theaters tonight (the first of four showings through the weekend). It was stunning! After seeing the show a dozen times, I didn’t expect new nuances, but some of the camera perspectives really brought out some nice new things about the performance.

The final cast was quite good. I’m glad I got to see Traci Thoms bring her Joanne to the stage. She was good in the Rent movie, but she was awesome on stage. Another stand out was Renée Elise Goldsberry as Mimi. I have found Mimi to be the wink link many casts because the actresses don’t mind their voices between the rock numbers and the ballads. This actress was spot on.

The finale was great too as the final cast joined with the original cast for one last “Seasons of Love” on the Neaderlander stage. 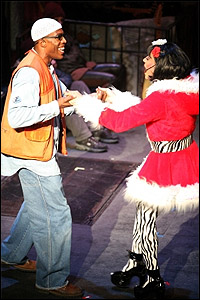 I have to say again, the filming was superb. A mix of closeups and side shots that captured the show beautifully. Some of the shots-especially Collins at Angel’s funeral and Roger sining to a dying Mimi-were beautiful and moving. The production crew did a great job capturing the shows energy and emotion.

The movie theater audience was, as you might guess, full of Rentheads. We clapped as if we were at the live show. We “moooed” during “Over The Moon.” And many cried with Angel’s death as well as at the finale.

Please, whoever owns the right… Make a DVD available!

This special event plays tomorrow night and Saturday and Sunday at movie theaters around the country. You can check thehotticket.net to see what’s in your area.

I’m glad I went. It’s an appropriate end to the Rent era.

No other road / No other way / No day but today!