Ptown: Art, Sex, and Money on the Outer Cape by Peter Manso 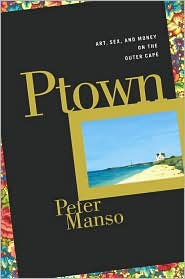 Ptown: Art, Sex, and Money on the Outer Cape by Peter Manso was a very engaging book to read in the lead up to and time after our vacation to Provincetown. Manso has lived in Ptown since the 1950s and that put him in a unique position to chronicle the history of the town, which is a Portuguese fishing village, an artist colony, a haven for gays and lesbians and a wildly popular tourist destination. Yes… it manages to be all of those at the same time; though depending on the time one part of that is usually more present than others.

The part of the book I found most compelling was how the town has evolved, and not always for the better. It has long been a place where anyone could go and be accepted, which was what attracted the artists and later the gay and lesbian community. Disturbingly, it seems gays and lesbians tried to take over the town, raising property values and taking control away from the long-time citizens who made them feel welcome in the first place. Granted, Manso comes at the topic as one of those long-timers, but it is backed up with a number of facts. I’d like to believe it’s not true that moneyed gays would do something like this, but all signs indicate it is something that happened in the late 90s and early 2000s. It is unclear the state of things today as the book was published in 2003 and, as far as I can tell, there is no updated copy.

Ahead of the vacation, it was a good education to read about carnival, the Crown & Anchor, the A-House, Spiritus Pizza and other landmarks in town. While in town, it was cool to find these locations and know a bit more about them than the regular tourist.

Other parts of town history were interesting as well. Learning about artist Jay Critchley, who works tirelessly for Ptown’s survival as a town welcoming of everyone, as well as for those with AIDS with his annual “Swim for Life.” Tony Jackett also provided an interesting read. He is one of the most colorful people in the book as he went from trying to be a successful fisherman to shellfish warden to a suspect in the Worthington murder.

All-in-all, a great book to read. It was great to read outside my usual genres.

Next up, When You Are Engulfed in Flames by David Sedaris.