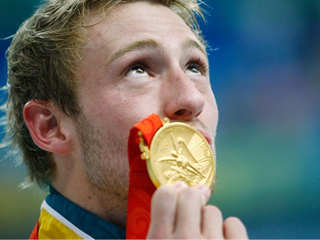 I first heard of Matthew Mitcham when he turned up on the cover of the August 26 issue of The Advocate. He was part of the Olympics/Sports Issue coverage (you can read that cover story online).

When we got home from vacation on Friday night, diving was on, and there he was in the qualifying and semifinals of the 10m platform competition. Not only did he dive great, but he was completely adorable. Of the six or so divers that NBC paid attention to, he was the only one who seemed to really enjoy being there. Every time he got out of the pool, he was smiling and waving to the camera.

Last night, Mitcham performed the upset of the diving competition, grabbing the gold away from the Chinese. He continued to be adorable in that last dive as he acknowledged his solid dive and fantastic scores, while not quite realizing that he’d just won. It wasn’t until the final diver had completed and someone came up to him and said “You’ve just won the Olympics!” that it sunk in for him.

NBC, for whatever reason, didn’t show the medal ceremony, but he was awesome there too. After he got his medal, he sprinted up in to the stands kissed his mom, gave her his bouquet and kissed his partner. You can check see the complete medal ceremony with this link on NBCOlympics.com.

Here are some other examples of Matthew’s adorableness from Entertainment Weekly, who proclaimed him Saturday’s Olympic Stud of the Day.