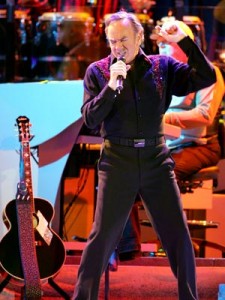 Tonight I was part of the capacity 18,600 crowd at the opening of Neil Diamond’s series of concerts at Madison Square Garden. What a fantastic show it was!

In a decided shift from the usual song lineup of his concerts I’ve been to or seen/heard recordings of, he opened the night with a rousing “Holly Holy” (this usually comes near the end). Among the other must-have songs of the night were “Play Me,” “You Don’t Bring Me Flowers,” “America,” “Love on the Rocks,” “Cherry Cherry,” “Solitary Man” and a many more. He had most of the crowd on their feet for the sing-a-long “Sweet Caroline,” which got two encores by popular demand.

He did some great stuff off the latest album, Home Before Dark, including the title track, “Pretty Amazing Grace” and “Don’t Go There.” He also dipped back to 12 Songs for “Man of God”and “Hell Yeah.” “Hell Yeah” was particularly awesome done live. He sang it so raw, especially the end verse. It gave me goosebumps.

You can tell “Hell Yeah” has particularly deep meaning for him, much like “Brooklyn Roads” and “I Am… I Said.” He did those two songs earlier in the performance and you can imagine all three songs becoming a trilogy in future concerts. “Hell Yeah” for this tour was in the slot usually reserved for “I Am… I Said,” at the end of the show (as in before the encores).

He pulled out some great songs I’ve not seen personally performed live. “Street Life,” was terrific. It’s a favorite from the Love at the Greek live record. “Crunchy Granola Suite” followed the arrangement from the Hot August Night live album and rocked the Garden. “Done Too Soon” was a treat to hear.

It was a fantastic, slightly more than two hour show. He was in great voice too. It’s possible this might turn up on DVD or TV. There were signs at the entrances indicating the MSG shows were being video recorded (and there were cameras everywhere). It would be cool to relive this show someday!