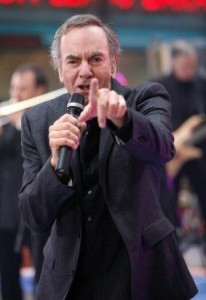 It was unplanned that two Geek Outs in a row would have to do with concert events, but that’s what has happened. Next Tuesday, Neil Diamond begins a four night run at Madison Square Garden, and I’ll be there for that first night. And, yes, I’m looking very forward to it.

I’ve been a fan for just about as long as I can remember. In 1977, my mom got hooked after the televised Love at the Greek concert, which led her to buy that album. Soon after that she starting picking up other albums and the music got played in the house all the time. “Desiree” and “If You Know What I Mean” are two of the songs I remember very clearly from the radio in that time.

In 1982, we took a road trip during my 8th grade spring break. At the time, we drove from Tuscaloosa, Alabama to Virginia. We stayed with my grandparents who lived about 90 minutes away from Roanoke, which was a stop on Diamond’s tour that year. It was crazy to road trip for a concert, but we had a great time!

Since then, I’ve seen five other concerts with three of them happening here in New York. The New York concerts are amazing since it is home turf for him. In particular, the concert he did in October 2001 was incredible, coming on the heels of 9/11. He poured his heart out for fans in the damaged city in a way I’ve never seen before.

Back in the days of vinyl records, I had quite the Neil Diamond collection, virtually everything he recorded. The only thing I could never get my hands on were some of his earliest records that had gone out of print, but I did have greatest hits albums that had some of those recordings from the mid-60s. I’ll admit too that I’d fallen out of buying new recordings between 1993 and 2005. He was doing a lot of covers and the original stuff wasn’t clicking for me.

But in 2005, he released 12 Songs and this year came Home Before Dark. Pairing up with Rick Rudin, who did superb work with Johnny Cash in the year’s before Cash’s death, worked magic on Diamond too. Back to the acoustic roots of some of his classic 60s and 70s songs, Neil Diamond has never been better than this.

I’m looking forward to Tuesday’s concert to hear some of the new stuff live (when I last saw him in the summer of 2005, he didn’t preview any of the 12 Songs material) and, of course, hear some classics as well.

For today’s video, I leave you with one of my favorite all-time songs: “Beautiful Noise” performed earlier this year while he was on the European leg of the current tour.