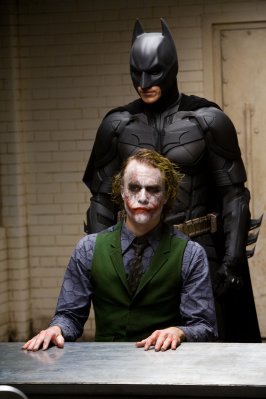 The reviews were right, The Dark Knight is an amazing film. I’ve never seen a superhero/comic book film quite like it.

The movie is a great psychological thriller. You never know the extent the Joker will go to. As he says, he is an agent of chaos and that pushes Batman to the brink more than once.  Even more psychology is explored with Harvey Dent, who goes on to become Two-Face (“You die a hero or live long enough to become the villain”). Dent does both in the span of about 160 minutes.

This movie takes both vililans to very darke places. Jack Nicholson’s Joker (from 1989’s Batman) and Tommy Lee Jones’ Two-Face (from 1995’s Batman Forever) are very comic-bookish. Here Heath Ledger as Joker and Aaron Eckhart as Dent/Two-Face are dark, troubled, menacing… and in the case of Joker, just plain evil. It’s unlike anything that has been in a big screen Batman.

Critics are also right on about Ledger’s performance. It’s far more than a standard comic book villain. Ledger is certainly Oscar worthy. His take on the Joker is chilling and is among the best acting performance seen so far this year.

Whether your a fan of Batman or not, The Dark Knight should be seen because it is a standout thriller with complex characters and a riveting plot. I hope director/writer Christopher Nolan decides to make a third Batman installment because his first two have been extraordinary.